[Editor’s Note: Those of you who had hoped I had been spirited away by black helicopters never to be seen again, or had died in a fiery, explosive car wreck — I’m sorry to disappoint you.  I’m back from a long holiday w

eekend in our state’s beautiful mountains.  The batteries are recharged and we are ready to deliver some haymakers to some deserving folks.  Buckle up.  It’s sure to be a heck of a week.]

We’re not big fans of The Politico around here. In fact, we affectionately refer to it in-house as The PoS-tico.  I am not going to do them the favor of linking to their site.  If you want to see it for yourself, you know where Google is.

The PoS-tico is the official voice of The Washington establishment.  Usually, it’s from the Democrat point of view.  But, as El Rushbo recently revealed to us, the House Republican leadership has become big fans of leaking to those guys.

Speaking of The Orange Man and his underlings — our very own Mark Meadows has been getting under some very powerful, very orange skin.   Boehner and his henchmen tried to remove Meadows from his committee chairmanship, but those pesky House rules got in the way and Meadows was reinstated. Now, Meadows has introduced a resolution calling for the speaker’s chair to be vacated.  In other words, he’s calling for Boehner to be FIRED.

Meadows has upped the ante recently by calling for his resolution be dealt with when Congress returns this week.  Conveniently, a story has showed up in The PoS-tico with this nasty headline:  Meadows cuts check for false mileage reimbursement. 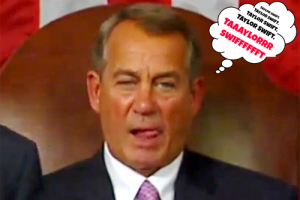 Really?  So, Mark Meadows defrauded the taxpayers?  Actually — we read into the story and learned that — somehow — Meadows’s former chief of staff got $400 worth of mileage reimbursements after he left Meadows’s staff.  Upon learning of this, Meadows wrote a personal check to reimburse Uncle Sam.

Now, I’ve worked on Capitol Hill and have a little inside knowledge on how this works.  First, Meadows himself did not cut the questionable check(s).  Congress is a huge bureaucracy just like The Pentagon and HHS and The Department of Agriculture.  Payroll and Accounts Payable are computerized, automated and very impersonal.  It’s not hard to believe that Meado 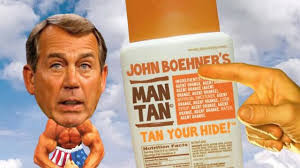 ws would not know about a check being cut for his former chief of staff.  It’s not like he’s brought a stack of checks to sign at the end of each month.

And, remember, this is the same institution that has run up $18 trillion in debt and ran the infamous “House Bank” debacle.  In light of all that, is a $400 payroll screwup worth a nasty, biased hadline and a feature story in a national publication?   It is if you are doing a solid for a certain orange man from Ohio — performing the journalistic equivalent of the ol’ horse head in the bed.

What’s more amazing about the Meadows-Boehner dustup is how few of Meadows’s colleagues are ready to jump in and help.  Walter Jones is the only North Carolinian to step up.   Virginia Foxx and Patrick McHenry — both of whom hold leadership roles — hav 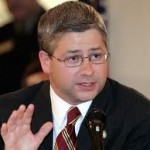 e twisted themselves in knots to defend Boehner and show contempt for Meadows.

(You want to read a great piece on Meadows?  Check this one out.)

There is no downside with the voters for opposing Boehner.  I am surprised at the cross-section of people I encounter, Tea Partiers to country-clubbers, who speak disdainfully of the orange man.  They — rightfully — see him as a co-conspirator in Obama’s destruction of the country.

The only reason any Republican Member of Congress would have for not standing with Meadows is a selfish one.  Keeping those prime committee assignments that keep the PAC dollars coming in.  In Peter Schweizer’s great book “Extortion,” he talks about Boehner’s prowess at orchestrating pay-for-play arrangements and how the orange man himself jokingly refers to it as a “toll booth.”

Standing with Boehner is not about furthering the interests of conservatism, promoting the party, or protectin

g the country.  It’s about keeping your pockets full with illicit cash and keeping the gravy train rolling.  Taxpayers be damned.

Making Boehner an issue in GOP primaries next year is smart.  (Are you listening, Jim Duncan and Pattie Curran?)  Make the incumbents in your races defend
their support for the orange man.   Standing with the establishment is not a popular move this year.  Don’t believe me?  Check out Trump’s numbers.

15 thoughts on “The GOPe slaps back at Mark Meadows”