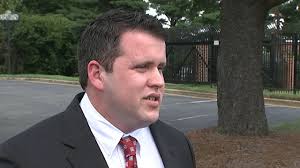 A guy named George Rouco is turning heads and being heralded as a “primary challenger” to incumbent Charlotte-area congressman Robert Pittenger (R).  But my sources in that part of the state tell me that Rouco is (1) a guy Pittenger’s cronies were grooming to succeed Pittenger when he decides to step down, and (2) being pushed into the race by a lot of establishment types that have been close to the campaigns of Thom Tillis, Richard Burr, George Holding, Renee Ellmers, and Pat McCrory.

Is this a signal that Pittenger is planning to step down amid an FBI probe of his business interests?  Or is he being given a strooooooong hint by the Charlotte mafia to go ahead and step down before the FBI affair blows up and drags them all down?

I’ve been warned by my Charlotte area friends to not accept this guy as a Tea Party warrior ready to smite Pittenger.  He would actually be a sequel to the Pittenger era, I’m told.

From afar, I’ve been quite impressed with Mecklenburg County commissioners Jim Puckett and Bill James..  Either of those two guys could be great conservative champions in the 9th district race.

10 thoughts on “#NC-09: Primary challenge or a HINT from the establishment?”