As I said earlier, I spent some time over the holiday weekend in the North Carolina mountains.  I hit a few social functions that included some friends who reside in the Charlotte area, as well as in South Carolina.   Amidst the usual holiday get-together banter, I learned something interesting:  South Carolina isn’t subjected to the state-owned and controlled liquor store monopoly we are.  You can actually choose from multiple privately-owned retailers in The Palmetto State for purchasing your adult beverages.

North Carolina’s ABC system prides itself on operating without any state money.   But nearly a century after Prohibition, and after most blue laws and dry counties are a thing of the past, why is it still here?

North Carolina is ONE of NINETEEN states that has state-run liquor stores.  South Carolina and Tennessee are not part of that NINETEEN.  (Virginia IS.)

There are all kinds of regional and local ABC boards packed with political cronies — allied with whomever is in charge in Raleigh at the time — making nice salaries.  There are all kinds of politically-connected folks — or relatives of said politically-connected folks — working in the stores.  It’s a vehicle for paying off cronies who help you stay in office.  It’s also a subtle, additional tool for bleeding the taxpayers.

In the South Carolina liquor stores, you can purchase your favorite spirits at a discount — sometimes up to 50% per bottle — of what you’ll be charged in a North Carolina ABC store.  And why not?  The ABC system has a lot of political cronies to pay.  Jones Street has a burgeoning bureaucracy to fund.  And don’t forget all of those city councillors  and sheriffs and county commissioners with their hands perpetually held out.

We’re also learning of cases where the growing ABC bureaucracy is putting pressure on small businesses out there who don’t even sell liquor.  Take this story from earlier this year: 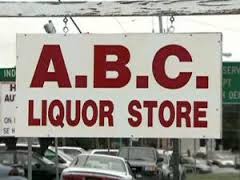 […] The impact of the last state budget hit R.L. Bass’s mailbox a few months back.

Bass – who has owned a small country store in Nash County for 57 years – was reviewing his annual renewal notice from the N.C. Alcoholic Beverage Control Commission. He said he was surprised to learn that the cost of selling beer had doubled from $200 to $400.

The paperwork didn’t explain the change, and Bass said calls to the ABC Commission and the governor’s office haven’t yielded answers. “Nobody up there will tell you anything,” he said.

Bass said his beer sales don’t justify the higher fee. “It’ll take me four months out of the year, selling beer out of this one little cooler, to make enough money just to pay the tax,” he said.

The country store owner’s confusion highlights the complicated and fast-moving legislative process that crafts the state budget each year.

“It’s not fair to put it on the retailers, where there’s very small cost to the ALE,” Land said, adding that bars and nightclubs are “where the problems come in.”

The ABC permit change got little media attention in a year when teacher pay raises dominated the budget headlines. So while it was on the books for more than a year before businesses had to pay, Bass said he and other retailers heard nothing about it.

Land – who says he owed an extra $9,000 this April for his multiple stores – said he didn’t factor the change into his annual budget because he got no notice from the ABC Commission. He said his 165 employees could be the eventual losers as he’ll have less money to offer raises.

[…] Changes in fees and taxes typically don’t take effect until months afterward, when the long hearings and heated legislative debates are a distant memory.

Despite the impact to his bottom line, Land said he doesn’t plan to lobby legislators to cut retailers a break in this year’s budget.

“You’re wasting your time,” he said.

Let this go.  Tax liquor the same way you already tax tobacco and other retail goods.  THIS would be a great place to demonstrate the desire of “the conservative revolution” to take power away from the government and put it back into the private sector.