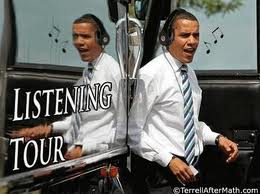 Hillary Clinton made the political listening tour a “trendy” thing in 1999 — the run up to her 2000 US Senate campaign — and 2007 — prior to her 2008 run for president.  The whole idea behind these tours was to, reportedly, put together her platform with contributions from Mr. and Mrs. Average American. Like clockwork, the media AND low-information Americans swooned and lapped it all up.

Hillary’s election to the Senate apparently sent a message to the political consultant class that listening tours were THE way to go.  Soon, EVERYBODY was doing listening tours.

This year, in North Carolina, we’ve got Charlotte pastor Mark Harris doing a listening tour to help him decide whether or not he wants to run for the US Senate.  And now, in the Second Congressional District, we’ve apparently got a primary challenger to Renee Ellmers launching a listening tour.

The American people are screaming, begging, pleading for leadership in government.  Leadership involves developing a well-thought-out plan, and then motivating people to follow you and support the implementation of your agenda.  (See Reagan, Ronald.)

These listening tours are a waste of time — a PR stunt.  They’re little more than pandering.  If you’re seriously considering a run for office, get out there and tell people what your firm, heart-felt principles are.  Tell people what you will fight for. Then, go to work selling people on the idea of putting you in office so you can implement your plans. Save the listening tour for when you are in office and want feedback from your constituents.

3 thoughts on “The folly of the political listening tour”