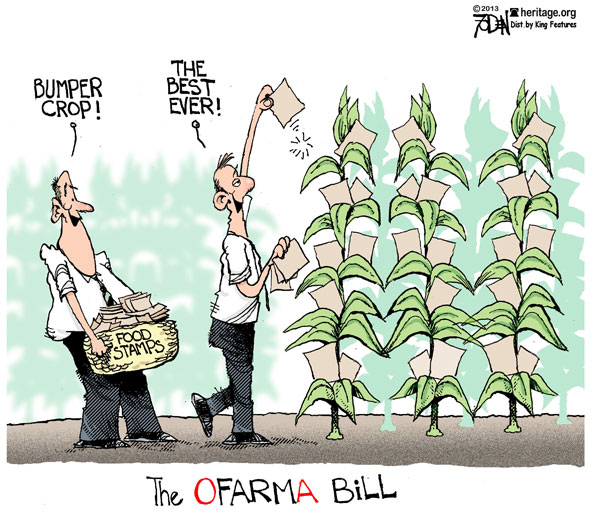 North Carolina’s senators, Kay Hagan (D) and Richard Burr (R), are teaming up to fend off purported cuts to federal subsidies for tobacco insurance.    Wait.  I thought we had a federal tobacco buyout.   Are people STILL growing tobacco domestically?  If so, WHAT exactly are the taxpayers paying to insure?

“Passing the farm bill is critical to ensuring our farmers have the certainty they need to operate their farms.”

The problem with that spin?:

Where do food stamps come from?

They come from taxpayers—certainly not from family farms. Yet the “farm” bill, a recurring subsidy-fest in Congress, is actually 80 percent food stamps and other government nutrition programs.

The food stamps sweeten the farm deal for lawmakers, who admit that the combination works for their political purposes. As Heritage experts Daren Bakst and Diane Katz explain:

Talk of de-politicizing agriculture programs and welfare policy is met with stiff resistance. For example, Senator Thad Cochran (R–MS), ranking Republican on the Senate Agriculture Committee, recently told the North American Agricultural Journalists group that food stamps should continue to be included in the farm bill “purely from a political perspective. It helps get the farm bill passed.”

Food stamps are there to help “get the farm bill passed.” And the relation of the rest of the farm bill to farming is also questionable. Bakst and Katz note that “Congress has expanded the farm bill over time into a costly compilation of disparate programs. Along with agriculture and food stamps, the legislation includes dozens of forestry, conservation, energy, and rural development programs.”

It has become the norm that Congress lumps billions—even trillions—of dollars in taxpayer-funded programs together into huge bills. This allows them to sneak in plenty of special-interest pork.

Each of these programs deserves to be evaluated on its own, and taxpayers deserve transparency from Congress about how it plans to spend our money.

Heritage’s Foundry blog has a great graphic illustrating some of the surprising recipients of farm bill spending.   Some of these lucky folks getting their hands on some of our money include former President Jimmy Carter, Ag Secretary Tom Vilsack, the Rockefellers, and scores of New York City residents.  Not many “Farmer Browns”  or “Ol’ McDonalds”  in sight.