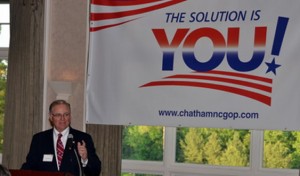 I spoke with a well-placed Tea Party activist based in The Second Congressional District who confirmed for me what has been one of the region’s worst kept secrets for some time:  Renee Ellmers is getting a primary opponent.

My source tells me that Jim Duncan, chairman of the Chatham County Republican Party, is in the process of forming an exploratory committee for a run for The Second Congressional District’s seat in the US House of Representatives:

”Jim Duncan is an amazing story.  If you ask people who know him, the first word that he brings to mind is authentic.  What you see is what you get.   He doesn’t want to sit on the sidelines and watch the country slide into 100 years of darkness.  He’s talked about this whole idea of running as a calling — an act of service. I honestly think he’s exactly what the folks who got so frustrated with Washington in 2009 and 2010 are looking for.”

Duncan is a retired senior executive with an international computer leasing and disaster recovery firm.  He helped lead the company’s sales efforts in the Eastern United States and Europe.  In his retirement years, he was a key player in helping the GOP take over the Chatham County board of commissioners ( for the first time in aeons).  He was elected chairman of the Chatham County GOP in 2011 — giving him a platform to knock heads with Randy Voller, the county’s Democrat Party chairman and current North Carolina Democrat Party chairman.  Duncan is also a founding member of the North Carolina-based Coalition for American Principles.

My source tells me Duncan has received encouragement from Tea Party-affiliated organizations and individuals at the national, state, and local levels.  More from my source:

“The idea of pleasing Eric Cantor and John Boehner is not even on Jim’s radar screen.  He’s all about carrying the concerns of his friends and neighbors here in North Carolina to the halls of Congress, and being a passionate advocate for those concerns.”

The Second District is overwhelmingly Republican.  So, everything gets settled in the May primary.  My source tells me to expect a formal filing of paperwork for the exploratory committee AND an official kickoff announcement before the end of September. With the US Senate primary – and THIS — the run up to May looks like its going to be FUN.