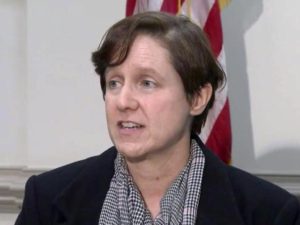 Dr. Megan Davies is being heralded by leftists activists, Democrat pols, and their comrades in the drive-by media for her courage in resigning her state job over Pat McCrory and the boys pollutin’ all the drinkin’ water.

There has been all kinds of hollering about coal ash FOR YEARS now.  Isn’t it interesting that Davies, the state epidemiologist, waited until the heat of the governor’s race to quit — and make a huge stink?

It’s also quite interesting that she appears to be a registered Democrat launching a very public attack on a Republican governor during his very heated, very close reelection campaign.  Follow The Money, the great site tracking political giving, suggests that Dr. Davies is also quite the fan of Joe Biden and Barry Obama. In 2012, it says she gave $500 to the Obama-Biden campaign.   The site indicates she also gave $1000 that year to The Obama Victory Fund.

We’ve seen this before — what appear to be wide-eyed innocent state employees resigning in horror and disgust with the new Republican administration.  Prior to 2012 — state government was stockpiled for decades with allies of elected members of Raleigh’s Democrat majority.

Stuff like this is pure Alinsky — creating as much chaos and public fear as possible, while completely discounting good solid proveable facts.  I am not suggesting that the McCrory administration could not possibly lie or cover something up.  I am not suggesting that government could not do something stupid that leads to people getting sick or dying. Contrary to what the drivebys are peddling to us, I don’t believe Pat McCrory gleefully went along with poisoning people.

I sure do wish the drivebys could deliver info to us devoid of the taint of political propaganda and spin. (I also wish I had Trump’s bank account, and could meet some of Melania’s old modeling friends.  But like the wish in the first sentence of this paragraph, that ain’t happening.)

29 thoughts on “(*SIGH*) ANOTHER political resignation?”