Well, Senate Democrats and 15 sell-out dirtbag RINOS have rammed through immigration legislation that makes a mockery of US citizenship and — if approved by the House — will fundamentally change our country demographically and politically. 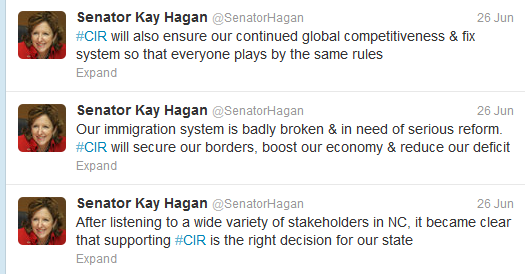 Everyone plays by the same rules?  How is that?  The feds aren’t enforcing existing immigration laws.  Boost our economy and reduce our deficit?  Why that’s just baffling nonsense.  The sock puppet didn’t stop there:

Well, Senator Burr didn’t agree with her.   Neither did The Heritage Foundation, led by South Carolina’s very own Jim DeMint:

[…]The United States is—by far—the world’s leading destination for immigrants.[1] More than any other nation in history, the United States has made itself a welcome home for immigrants in search of a better life. Over the past several decades, however, immigration policy has become confused, unfocused, and dysfunctional. America lacks a simple system to attract the qualified immigrants who can help the economy grow. Millions of people who came to the U.S. unlawfully belie the core principle of the rule of law and make a mockery of the legal immigration process, while continued large-scale immigration without effective assimilation threatens social cohesion and America’s civic culture and common identity. This is especially true if immigrants are assimilated into the welfare state rather than into a society of opportunity.

American citizens, as well as current and future immigrants, all deserve better than the current system. Yet, the present reform proposal in the Senate amounts to little more than an “easy button” solution that will fail to solve the many challenges of America’s broken immigration system. History, in fact, has shown that big bills designed to solve everything wind up creating as many problems as they address.[2]They become loaded with payoffs for special interests and often introduce measures that work at cross-purposes. The same is true of the Border Security, Economic Opportunity, and Immigration Modernization Act (S. 744).

Introduced on April 17, 2013, the Border Security, Economic Opportunity, and Immigration Modernization Act offers a flawed approach to fixing the nation’s broken immigration system. Not only does the legislation fail to address the intricacies of America’s immigration challenges by trying to solve everything in one colossal bill, it also imposes exorbitant costs and is full of political trade-offs and misguided policies. […]

Well, the future of our country now rests in the hands of John Boehner and the GOP caucus in the US House.  Not exactly a comforting thought, is it?