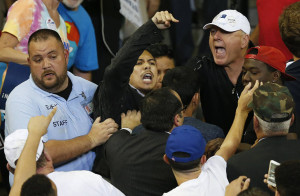 The driveby media regularly celebrates the hippies who battled the cops in the streets of Chicago during the 1968 convention. *It’s heroism. It’s that tried and true American tradition of dissent.*

Gay rights activists have been disrupting church services and other events for decades now — to not one peep of criticism from the media.  Left-wing rioting in Seattle and Oakland has become so commonplace that we rarely get any reporting on it. *No big deal. Nothing to see here.*

Yet, since 2009 and the rise of The Tea Party, the chattering classes and the drivebys have been apoplectic. *How dare these people disrupt this Democrat’s carefully staged town hall meeting!*

Then we started seeing SEIU goons physically striking back at Tea Partiers— not long after Barack Hussein Obama began publicly urging his supporters to ”get in their faces … argue with them.”

A disabled black wheelchair-bound Tea Party activist in St. Louis was roughed up by SEIU goons — simply for handing out Gadsden flags. In Durham, also in 2009, THIS happened:

Gene Ellefson was punched at the beginning of the evening, surprising the relatively quiet crowd and witnesses, who said there was very little arguing leading up to the punch. “I was punched with no blood drawn by an older man who didn’t like comments I made .??.??. to a stranger sitting nearby who was also a conservative,” said Ellefson, who pressed charges and has a court date in September. “I was not belligerent and I was not shouting as I have seen in other coverage of these types of events. There was very little yelling at all at this event.”

According to local media, the perpetrator seems to have been a man wearing a union sticker named Woffozo Humphries who was escorted out by police. In a video of the aftermath, a liberal audience member is heard asking, “Do you have health insurance?” to laughter, as Ellefson leaves the auditorium. […]

Political gatherings are very emotional — not unlike sporting events.  You have fights all the time in the stands at games.  The Philadelphia Eagles have a jail in the stadium to 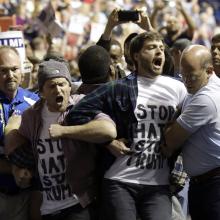 Seriously, should we expect Jerry Richardson to be held responsible for the antics of every drunk in the stands at Charlotte’s BofA Stadium?

I’ll never forget an incident at one of the Duke-Carolina games at the Smith Center in Chapel Hill.  A young man in a Duke sweatshirt would get up in the aisle and dance whenever Duke scored a basket.  He would shake his posterior at all of us Carolina fans.  Quite obnoxious.  Well, after the 67th time this guy got up to dance, an elderly man in a Carolina sweatshirt got up and cold-cocked the Dookie in the face — laid him out flat on his back.  The old man took off running, and security came running.  Many of the Carolina fans sitting near the incident gave the old man a standing ovation.

Stuff happens.  I am certainly not recommending that you go out and  punch everyone who irritates you.  But I do think that when you are walking into an environment where you are a distinct minority — like at the Carolina game or at the Trump rally in Fayetteville — you need to check your behavior and tone things down.  Recognize that you are in ”enemy territory”.   Shaking your posterior at Carolina fans, or flipping off ten thousand Trump fans, or shouting the notorious N-word at an NAACP event, is not exactly a great way to ensure warm, hospitable treatment for yourself. 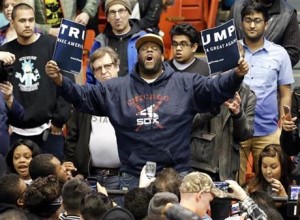 I am not about to take responsibility for the actions of all of the Haymaker fans out there.  I love you guys and gals, but HEY — you ARE grownups.

I am all for a free exchange of ideas.  You learn more by listening to other people.  We’ve got at least one regular liberal commenter on this site.  One of the things that has ensured his longevity is that he can actually make statements that don’t include slander or profanity.  (I’ve had to blacklist and run off quite a crowd of foul-mouthed leftist pinheads.)  Other liberals who want to jump in and debate here are welcome — if you can behave.

Let people make their points.  Even if they are different from yours.  Even if you view Donald Trump as the antichrist, let him talk to his people.  Heckling, disrupting and shutting him down are against everything this country was founded on.

4 thoughts on “Selective outrage over rough stuff at political events”