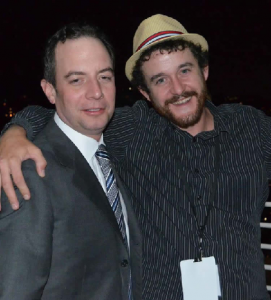 Howard Stern had a great gag with one of his sidekicks  — a guy named Stuttering John.  John, armed with a camera, would approach some celebrity and ask a really offensive question. Something they really, really, really didn’t want to talk about.  If the celebrity freaked out in response, Howard and John had some great video.  (If the celebrity calmly responded, or fired back with a witty comeback, and then calmly walked away, there was nothing really to use on Howard’s show.)

Recently, the House speaker in Raleigh had one  of his aides put out a “red-alert” to Republican members warning them about people with cameras near the legislative building.

Let’s fast forward to the recent NCGOP convention.  Guerrilla cameraman Chuck Suter and his sidekick Rocco — armed with a camera and their senses of humor — stumbled upon House speaker pro tem Paul “Skip” Stam.   Chuck was ready to ask Stam about his support for giving driver licenses to illegal aliens.

Stam can be seen on camera almost immediately losing his cool when he sees the camera.  He urges Suter twice to “turn that off.”  Some Stam allies attempt to block the camera’s view of Stam.  Rocco attempts to ask Stam a question, but the legislator cuts him off:

One female acquaintance of Stam’s turned to Chuck and asked: “Do you have permission to be filming him?” 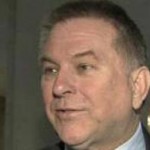 You don’t need it in a public area — where this encounter took place.  It’s so interesting to see a politician terror-stricken over the sight of a video camera.

At the end of Chuck’s video, we see a textbook example of HOW to handle these surprise encounters with video cameras.  Chuck and Rocco encounter Charlotte pastor — and former US Senate candidate — Mark Harris, who rather artfully and wittily engages and handles the duo.

Skip Stam and Bob Etheridge-esque reactions to video cameras guarantee that you will see more and more video cameras out there.  Running from them — or even reacting to them like they are the bogeyman — just makes things worse for you. (And more entertaining for US.)

13 thoughts on “Politics 101: How to handle people with video cameras”