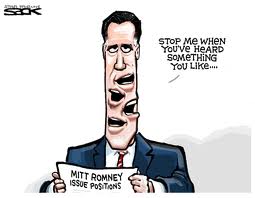 It looks like the scheme by North Carolina Democrats to split conservatives from Pat McCrory  is well-underway.  The North Carolina Democrat Party has launched a parody site raising questions about McCrory.  Now,  reliably leftist Chris Fitzsimon, who works for reliably leftist NC PolicyWatch, has produced a column comparing McCrory to presidential candidate Mitt Romney,  a  bogeyman to many movement conservatives:

The 2012 governor’s race in North Carolina continues to draw a lot of national attention, constantly popping up on lists of the most competitive races in the country.

Much of the focus is on the candidate who has supported tax increases, pushed hard for federal funds to support pet projects and programs, catered to environmentalists, and is now taking money from long time Raleigh political insiders.

The same candidate presided over a government ranked high in tax burden by conservative think tanks and supported massive incentive packages to recruit industry and tourism attractions, even sports arenas.

That would also be the candidate who not only was an outspoken advocate for mass transit, but said in a New Year’s resolution a few years back that land-use planning was a top priority. That sounds like a lot of big government, surely sending shivers through the Tea Party crowd.

The candidate is former Charlotte mayor Pat McCrory, though you may not recognize him.

He has been busy doing sort of a Mitt Romney imitation in his nonstop campaigning since the day after he lost the 2008 election, trying to make himself more acceptable to the increasingly right-wing base of the Republican Party.

In Romney’s case, it has meant changing his position on everything from gun control to gay rights to abortion, not to mention trying to explain away his health care reform in Massachusetts that included an individual mandate.

The mandate became an important part of the Affordable Care Act that we are now told by the Right could mean the end of Western Civilization as we know it.

Romney has plenty of company in trying to squirm free of his reasonable past on health care reform. The individual mandate came out of the Reagan Administration and was pushed in Congress by the Heritage Foundation and heartily endorsed by Republican leaders like Newt Gingrich.

McCrory spent the summer of 2009 speaking out against health care reform at events held by Tea Party groups and their right-wing think tank cousins.

He voiced robocalls for Americans for Prosperity in its efforts to stop campaign finance reform and pass a restrictive voter ID law in the General Assembly. He even voiced an ad for an unsuccessful Tea Party candidate in last fall’s Wake County School Board election.

McCrory has also cozied up to Republican legislative leaders like House Speaker Thom Tillis, whose Republican House passed a long list of right-wing legislation last session, including the most extreme anti-choice law in the country, a repeal of the Racial Justice Act, and a budget that slashed funding for education, human services, and environmental protections.

The House also did the bidding of the shady consumer finance industry over the objections of the U.S. Secretary of Defense and base commanders in North Carolina worried about soldiers being targeted with high interest loans.

It is not the first time a former Charlotte mayor tried to run away from his moderate past. Republican Richard Vinroot did too in a gubernatorial primary against Robin Hayes in 1996, all but apologizing for his support of Planned Parenthood and a gun buyback program during his reign as mayor.

But there’s a difference. Vinroot and Romney screeched to the right in a Republican primary. McCrory is unlikely to have any serious primary opposition. This week’s news that his campaign raised $1.5 million in the last six months of 2011 removes any doubt about that.

So now it’s McCrory against Perdue. But it’s also McCrory against McCrory, the occasionally moderate, independent urban mayor versus the mouthpiece for Americans for Prosperity and supporter of the most ideologically extreme General Assembly in the state’s history.

The pundits are right about one thing. It all makes for an interesting race–or races—to watch.

It’s likely that we — on the right — are going to have an uncomfortable choice in 2012.  Our choice will be four more years of Boss Bev — UNACCEPTABLE, of course — or four years of Pat.  We can’t trust the mainstream media or the NCGOP or the Raleigh Republican Ruling Class to keep Pat in line ideologically.  We need to work through vehicles — like The Tea Party — to keep pushing him in the right direction.