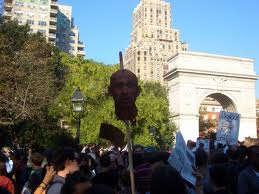 (Yes, that is a severed head on a pike at the Occupy Wall Street ‘event’ in NYC.  More specifically, it is an effigy of Goldman Sachs CEO Lloyd Blankfein’s severed head on a pike.  Isn’t THAT nice AND peaceful?  Boy, Mr. Blankfein, after seeing that, has got to be feeling really safe and secure.   A few guys show up at Tea Party rallies with pictures of Obama in a Hitler mustache, and we don’t hear the end of it from the alleged mainstream media.  This photo is more than a week old.  Has anyone heard anything about it on an alleged mainstream media outlet?)

In North Carolina, Secretary of State Elaine Marshall (D) and Congressman Brad Miller (D) have lent their support to this violent, extremist ‘Occupy’ movement, and the folks at The N&O are just cooing lovingly:

Secretary of State Elaine Marshall showed up at the Occupy Raleigh rally Saturday to lend her support to the protesters. She also spoke briefly.

“I just wanted to show these people some support,” said Marshall, who was the Democratic nominee for the U.S. Senate last year, in a statement. “They are frustrated and many of them are hurting. Some have lost their jobs and houses while others have seen their incomes stagnate. They need to know their elected officials are listening.”

During the Senate campaign last year, Marshall called for banking regulations and financial reform. Marshall attended the rally at the Capitol grounds but was not there later when a group of protesters refused to leave, leading to 20 arrests.

She is the second major Democratic figure to show up at an anti-Wall Street rally. The previous weekend, Rep. Brad Miller, a Democrat from Raleigh, attended an Occupy rally at Moore Square, but did not speak.

Just imagine a Tea Party protester walking around with an effigy of Barack Obama’s head (or Rob Christensen’s, for that matter) on a pike.  Would the Raleigh rag be this compliant and cooperative?

(I’ve also seen a sign or two at these OWS gatherings urging kids to “kill your parents.”  )

This article shows how out of touch Elaine Marshall and Brad Miller are with this state.  Miller, who drew his own congressional district while he was a member of the state Senate, has been redistricted out of said district by the new Republican majority.  He will find himself standing in line — with  a good many of us — looking for a REAL job in November 2012.

Marshall used to represent Harnett County in the state Senate.  In the Democrat year of 1996 — in a race I witnessed up close and personal — Marshall, loaded down with PAC money, lost to a Republican sign painter who did little more than pay his filing fee.  The good Baptists in Harnett County figured out how extreme she was behaving in Raleigh, and sent her home.

Realizing she had worn out her welcome with the folks in Harnett, Marshall set her sights on statewide office.  She got the secretary of state job — a noncontroversial job that gets little coverage from the media and not much attention from voters.  The SoS’s fortunes in election years typically depend on the strength of the party’s gubernatorial nominee.  (Unfortunately for NC — but fortunate for Marshall — the Dems have been very strong in governor’s races.)

Hopefully, in 2012, the state GOP will be motivated by Marshall’s extreme left turn and put a strong challenger up against her who will be helped by Boss Bev’s much-anticipated whipping.  (She is so beatable, as that Harnett sign painter in 1996 proved.)

It is unacceptable to have elected officials, paid by tax money, to be out publicly supporting violent, lawbreaking extremists calling for the overthrow of the government and the economy.  It’s even more disgusting to have our state’s ‘alleged’ flagship newspaper cooing lovingly over stuff like this.