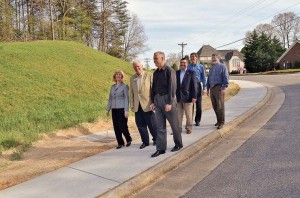 State House speaker Thom Tillis has been catching some grief for not participating in the ‘rubber-chicken-circuit’ meet-and-greets that are a staple of party primaries.  In February, Tillis told the media that was all about to change — that he was ‘chomping at the bit’ to defend his record.

On Friday night, he had a chance to do just that — at The East Wake Republican Club’s Great Debate.  Tillis was the only one of the eight declared candidates for the GOP nomination for US Senate to miss the event.  Lil’ Jordan, Thom’s pint-sized sidekick, said his boss’s absence had to do with a scheduling conflict that could not be moved.

What was so important to keep Speaker Thom from “defending his record” before hundreds of Republican primary voters in Wake County?  According to Wilkes County media sources, Mr. Big Boy Pants™ had an important sidewalk inspection to conduct on the same day and at the same time as the candidate debate.  Tillis has become quite the authority on the construction of toll roads, so it makes perfect sense to call him in to inspect your new sidewalks.

Apparently, Wake County Republicans were not amused at the Tillis snub.  Greg Brannon won the straw poll that followed the debate with 51 percent.  Mark Harris came in second at 25 percent.  (Tillis came in dead last with five percent.)

9 thoughts on “#NCSEN: Where’s Thom? ‘Chomping at the bit’ — to inspect sidewalks.”