State House Speaker Thom Tillis — one of a gaggle of GOP candidates seeking the party’s nomination for US Senate — took to Facebook this week to tout his record and debate his critics.  One subject in that Facebook debate — that happens to have stirred up a lot of controversy in Tillis’ own backyard — was toll roads: 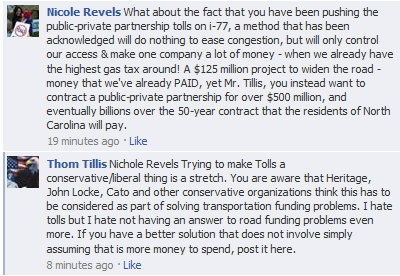 OK.  So, he brings up Cato, John Locke and Heritage as toll road proponents.  Let’s check that out.  Here’s a post by someone at Heritage Action urging the federal government get out of the road building business, and have the construction and maintenance of those roads financed by tolls.  Here’s a piece from a Cato scholar touting the idea of privatized toll roads.  Here’s ANOTHER Cato scholar raising serious concerns about privatized toll roads.  So, there really isn’t a conservative consensus on the subject.    It’s funny.  I don’t see any of those scholars or organizations endorsing the idea of public-private toll roads WHILE maintaining one of the highest gas tax rates in the country.

Here’s some food for thought — from a Texan who has been living with this whole public-private toll roads thing — for Toll Road Thom and his friends on Jones Street to chew on:

It’s hard to disagree with much of what a recent Wall Street Journal (WSJ) editorial advocates, like making the highway fund solvent, returning gas tax money sent to Washington back to the states, and loosening the federal strings attached to road money. However, where they’re missing the boat is this notion that private money will be the silver bullet to fix road revenue shortfalls and provide what’s often called ‘gap funding.’

There’s a hefty price that comes with seeking private money to build public roads using public private partnerships (P3s), as well as loss of sovereignty and control over the surrounding free routes (through non-competes clauses that prohibit or penalize expansion of free roads). Not only are toll rates on these privatized roads punitively higher than public toll roads (75 cents a mile versus 12-15 cents per mile on a public toll road), heaps of taxpayer money subsidize these government-sanctioned monopolies (so having to pay a toll, too, is DOUBLE TAXATION).

Also, these sweetheart P3s deals are structured to GUARANTEE private profits at the public’s expense. On the North Tarrant Express project (I-820) in DFW, taxpayers brought three-quarters of the money to the table, the Spanish firm, Cintra, only one-quarter, yet Cintra gets the exclusive right to set and collect tolls (at a rate of 75 cents per mile in peak hours) for the next half century in return for their paltry investment.

The WSJ’s subhead says ‘Americans don’t want to live in LaHood’s car-free utopia,’ knocking Secretary of Transportation Ray LaHood’s livability agenda, which is actually a more sanitized name for the United Nations’ Agenda 21 anti-car policies that seek to herd people into high density housing in the inner cities and force motorists out of their cars and into mass transit.

Yet, the very policies the WSJ advocates, P3 toll roads, have the same net effect. It makes driving unaffordable and forces the majority of the traveling public out of their cars or stuck in unbearable congestion on unimproved free routes — so those who cannot afford to pay 75 cents a mile to get to work will be treated as second class citizens without mobility, even though they continue to pay gas taxes for roads.

The average worker has no control over when he reports to work. Many cannot afford to live close to their jobs, others plain don’t want to. Yet the WSJ and many libertarian and so-called conservative think tanks advocate congestion pricing that gouges commuters during peak hours in an attempt by government, or its private surrogates, to ‘manage’ traffic flow and purposely discourage peak hour travel.

‘Managed lanes’ utilize congestion pricing which is a variable toll rate that changes depending on time of day and level of traffic on the toll lanes. The more cars, the higher the price, creating road scarcity through pricing. Economists love it since their textbook free market theories get put into practice by governments.

However, government-sanctioned monopolies cannot be considered a free market solution to congestion. When there’s only one way to get where you need to go and the state puts that road in the hands of a private corporation who controls the toll rates and dictates how much you’ll have to pay to get to work at your appointed time, that’s not free choice nor free market — it’s tyranny.

Changing the tide
Georgia Governor Nathan Deal had his own awakening to the threat to state sovereignty by handing control of public roads to private, even foreign, corporations and he pulled the plug on Georgia’s P3 program, calling them “ill-conceived sell-outs” of state sovereignty. Recently, a Cato Institute scholar, Timothy Lee, also reconsidered his support for P3s reasoning that it threatens our freedom to travel. So the tide is turning as the political and financial realities of these failed policies come to light.

So while we need to get a fiscally responsible federal highway bill passed and while we need to give the states back the money they send to Washington and stop diverting road funds to non-road purposes, advocating P3s as part of the solution to make-up structural road funding shortfalls is fiscally irresponsible and a taxpayer rip-off, putting the cost of transportation so far out of reach for the average person that these toll roads will go bankrupt from lack of use, necessitating more taxpayer bailouts and malfeasance.

Oh. ABC 11 did a great story a while back about a Raleigh-area toll road that is seriously under-used and struggling to make it out of the red financially.

More problematic for the man crowned by McClatchy as the front runner in the GOP primary is the fact that he has been on both sides of the toll road issue, and his current view puts him in line with that of Walter Dalton.

Also, the state GOP approved an anti-toll plank for its 2013 platform.  Tillis responded by heading back to Raleigh and ramming through legislation allowing for toll roads.

6 thoughts on “#NCSEN: Thom Tillis and those TOLL ROADS”