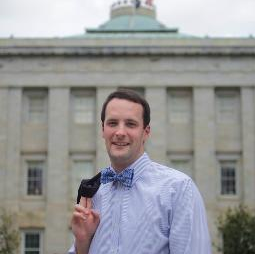 Conservatives have been convinced for some time that mainstream media reporters distort events and outright lie in their coverage of right-leaning figures, organizations, and events.  The N&O’s John Frank (pictured with this post) has done an admirable job of proving right-wingers’ theories about the press to be on-the-money.

This week, we posted about a hit piece Frank — lovingly referred to as John Drescher’s attack shih-tzu — authored against Republican US Senate candidate Greg Brannon.   Frank — clearly trying to please his master — tried his damnedest to suggest Brannon was a fan of slavery:

[…] Plenty of questions remain. In a speech, Brannon also suggested a change in the hearts and minds of the American people led to the end of slavery and made no mention of the Civil War. His views are sure to get more attention in coming weeks and the poll numbers may change as a result.[…]

You ask: What the hell is this little lapdog yipping about?   This week, Brannon was honored for his role as the medical director at Wake County’s Hand of Hope Pregnancy Resource Center.  The candidate gave a speech at a banquet in his honor,  and Frank and WRAL’s Mark “Witch-Gate” Binker were in attendance.  A source who was present at the banquet tells me Frank and Binker were there for the entirety of Brannon’s speech and got an extended audience with the candidate after the speech was over.  Here is what Binker produced, and HERE is what Frank published.

HERE is the full video of Brannon’s speech “covered” by Binker and Frank.  (It’s about 25 minutes long.)  Brannon does make analogies to events in American history — such as slavery, the Civil Rights struggle, and the 1973 Roe v. Wade Supreme Court decision.   The candidate — in the speech on the video — makes the point repeatedly that positive fundamental changes have come about less by the heavy hand of the government and more from changing people’s minds via compassion.    *Shocking, radical stuff.*

Binker got nailed — thanks to his own station’s video — playing fast and loose with the facts in his reporting.  It looks like it is now John Frank’s turn.

It’s  shame that we have to rely on YouTube video to verify the integrity of what we’re reading in the mainstream media.

2 thoughts on “#NCSEN: HAVE bow tie, WILL prevaricate”