Some Republicans and Tea Partiers in and around Moore County are launching a “Clothespin Challenge.”  One of the organizers posted 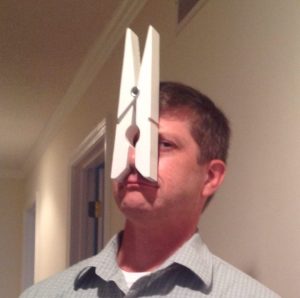 All you disconcerted or apathetic voters out there, your guy didn’t win the primary? Well, it is time to get with it and join our CLOTHESPIN CHALLENGE!
Romney received 3 million fewer votes than John McCain, assuring an Obama victory. Let’s not let that happen here in NC, and allow Kay Hagan to be reelected because we sat at home.
Join us by posting your picture and promise to vote for Thom Tillis here, and GET OUT THE VOTE!
We are voting Thom Tillis this November!

So, the predominant GOTV strategy this year is ”hold your nose” and mark the box next to the GOP candidate’s name?  Is that what we’ve become?  From Barry Goldwater and Ronald Reagan and Jesse Helms’s appeals for liberty and freedom and limited government to HOLD YOUR NOSE?  (SMH)

We got a lot of mileage out of a passionate conservative message.  Back then, we were trying to change people’s hearts and minds, as well as their vote.  Now, we’re reduced to getting them to change their vote.  Mark the R instead of the D. (Hold your nose while you do it.)

As the polls indicate, saying little of substance and hoping voters vent their frustration with Obama on Kay Hagan is not working.

46 thoughts on “#NCSEN: The charge of the clothespin brigade”