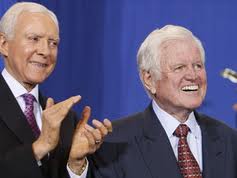 US Senator Orrin Hatch (R-Utah) has been in Washington for a looooong time.  He got there before Ronald Reagan did.  He started off as a good conservative, but — as time went on — started to “grow in office.”

Word came out today that Hatch would be doing a fundraising conference call to help state House speaker Thom Tillis raise money for his US Senate bid.

In recent decades, Hatch started to win positive media coverage due to his friendship with his Senate colleague, the late Ted Kennedy (D-Mass).  Hatch gave Kennedy a lot of GOP cover for some really horrible, terribly statist pieces of legislation.   Here, he wrote a column eulogizing Kennedy following his 2009 death:

[…] We can all take a lesson from Ted’s 47 years of service and accomplishment. I hope that America’s ideological opposites in Congress, on the airwaves, in cyberspace, and in the public square will learn that being faithful to a political party or a philosophical view does not preclude civility, or even friendships, with those on the other side.

When reflecting on my dear friend’s life, my thoughts continue to turn to the future of this great nation. With the loss of such a liberal legislative powerhouse who spoke with conviction for his side of the aisle but who was always willing to look at an issue and find a way to negotiate a bipartisan deal, I fear that Washington has become too bitterly partisan. I hope that Americans in general and Washington politicians in particular will take a lesson from Ted’s life and realize that we must aggressively advocate for our positions but realize that in the end, we have to put aside political pandering, work together and do what is best for America. […]

Ask the families of Ronald Reagan, Robert Bork and Clarence Thomas about Ted Kennedy’s *propensity* for “putting aside political pandering” and “doing what’s best for America.”  Kennedy was, in fact, a ruthless hitman for the Left — shredding conservative policies and leaders.

“What do you call a senator who’s served in office for 18 years?” Sen. Orrin Hatch (R-Utah), asked about his opponent in the first of his many Senate campaigns. “You call him home.”

I have a similar question: What do you call a senator who claims to be “one of the greatest conservatives in the history of this country,” yet votes for Wall Street bailouts and serial increases in the national debt; loads bills with expensive earmarks, and supports an individual health care mandate?

Utahans are calling his bluff.

Hatch’s campaign recently attacked my organization, FreedomWorks, questioning us and our intentions. Well senator, we are a grass-roots organization committed to lower taxes and less government. We support the work of small government conservatives, both outside and inside government.

Hatch’s campaign says that FreedomWorks is an “out-of-state special interest group” that is making false claims against the senator’s voting record. But FreedomWorks relies on grass-roots activists from all 50 states — including 14,000 in Utah. Utah members chose this fight and asked for our support.

Hatch has been in Washington for 36 years and he wants another six. But he is now a creature of Washington, ill-equipped to fight for fiscal responsibility. Hatch’s fundraising numbers also show how detached from Utah he has become. At of the end of 2011, about 93 percent of the roughly $5 million raised by Hatch’s campaign came from outside of Utah, according to the Federal Election Commission, with about 17 percent from the District of Columbia. Who’s the real outsider, senator?

The people of Utah consistently reject fiscal irresponsibility. Yet, in 2010, Hatch was the Senate’s third-highest earmarker. Long before taxpayers were forced to pick up the bill for President Barack Obama’s failed experiment in crony capitalism – Solyndra — Hatch sought no less than seven earmarks totaling $20 million for a renewable energy venture named Raser. The Obama administration eventually funded the company, and it promptly went bankrupt. But not before the company renamed its facility in honor of Hatch.

The tea party coalesced in response to massive government growth and the burden of irresponsible spending that threatens the futures of our grandchildren. Hatch, despite trying to talk the talk of limited government values, has taken an active role in expanding our oversized government. He voted 16 different times to raise the debt ceiling by a grand total of $7.5 trillion. He also voted for the TARP bailout — $700 billion to bail out irresponsible Wall Street bankers.

Hatch’s campaign is now attacking the grass-roots Utahans who have brought these facts to light. The problem for his campaign is that the numbers don’t lie. Hatch has lost touch with the conservative values he claims to champion.

With all due respect senator, it’s time to go home.