State House Speaker — and US Senate candidate — Thom Tillis has been quite talkative lately via email. He’s tackled taxes and immigration, and has now moved on to the topic of Richard Morgan & Jim Black:

First, “Ivan” is Ivan Mothershead, who we met in a previous post on this site.  The “road kill blog” he’s referring to is THIS SITE.  Tillis wrote previously that he coined the term in response to someone asking him if he read The Haymaker.  Tillis said he occasionally looks at the site, in passing, kind of like he looks at road kill as he speeds past it on the highway.

That’s interesting.  I know Tillis has taken shots at us several times on his Facebook page.  I also know that his wife, Susan, has made extensive efforts to research me.  So, it appears that the ol’ DH is more than a passing fancy for him.  I personally think that we’re living rent-free inside the heads of Mr. and Mrs. T.

Let’s tackle this whole logic and critical thinking thing Speaker Thom raises.  Richard Morgan publicly boasted about recruiting an opponent for then-state Rep. John Rhodes — who was a major nuisance to the Morgan-Black scheme.  The effort apparently fell through, and Rhodes ended up having no primary or general election opposition in 2004.

Magically, Rhodes gets an opponent in 2006 — in the form of former Cornelius Town commissioner Thom Tillis.   Tillis’ current chief political strategist, Paul Shumaker, served in that same role for former state Rep. Richard Morgan.  Shumaker went public in 2003 about his efforts to assist Morgan in attacking Republicans who weren’t team players with the Morgan-Black regime on Jones Street. 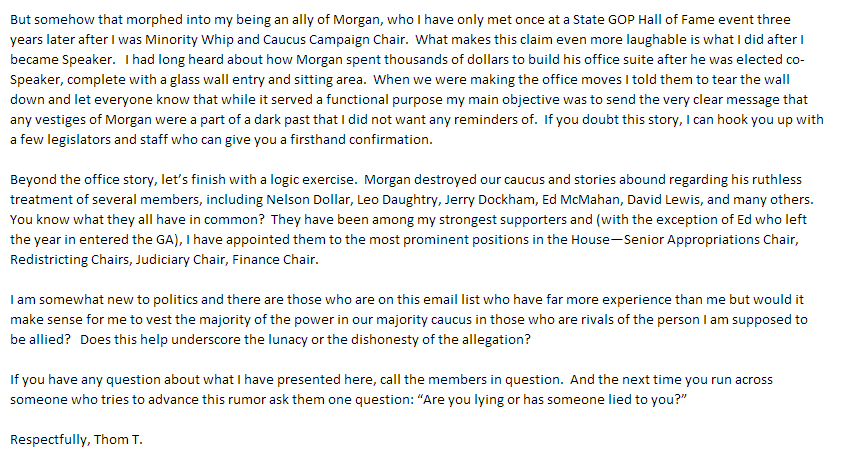 Hmm.  “Ruthless treatment” of fellow caucus members?  I bet Robert Brawley can relate to that.

The speaker neglects to mention all of the Morgan-Black co-conspirators who ALSO got some sweet deals during the Tillis era in the House.  Former Rep. Stephen LaRoque — a close ally of Richard Morgan — was appointed chairman of the powerful, influential House Rules committee. (During his corruption trial, Laroque testified that he was Thom Tillis’ “right hand man” in the House.  Word is that Laroque is expected back in court in February — just in time for filing for the May primaries.)

Julia Howard — another close Morgan ally — also has been rewarded with some sweet committee assignments, as you can see here.

Morgan ally Harold Brubaker got to chair a joint committee on the “modernization” of the state’s banking laws.