In a legislative year that sought to silence women, Rep. Deborah Ross remained a vocal and active fighter against Amendment One at events all across the Triangle region. The five-term representative even scolded pro-Amendment One lawmakers from the floor of the General Assembly, saying “The next generation does not view this the way that you do. The next generation is more open, more loving, more tolerant. I frankly trust the next generation more than I trust my elders.” […]

She’s a smooth talker with a law degree.  She’s, um, somewhat easy on the eyes (I’m told.  Maybe after a few drinks? Around last call?). She knows the issues and has

debated rings around Thom Thilli$.  Richard Burr, on the other hand, is Mr. Bean with a Southern accent.  You don’t know what the man is going to say or do next.  Miz Ross is Hillary Clinton on steroids.  If Hillary in The White House scares you, Miz Debbie slithering around the Senate giving everybody the stink-eye should definitely send a shiver down your spine.

Once again, conservatives have a dilemma.  We had a nominee in 2014 we weren’t thrilled with, but an incumbent we really couldn’t take six more years of.  A lot of people voted for the lesser of two evils and now we’re stuck with Capt. ‘Aisle-crosser,’ his F conservative rating, and his peach-fuzz beard for six years.

Now, in 2016, we’re living it all over again just like Bill Murray did in that movie

Burr told us once that the concept  of defunding ObamaCare was “the dumbest idea” he’d ever heard of.  What does Miz Debbie think of that charlie-foxtrot called ObamaCare?:

[…] When asked about the Affordable Care Act, Ross said the bill wasn’t perfect but “has certainly done much more good than it has done harm to the healthcare system.” For example, she said the act could do more to decrease the cost of prescription drugs. The act, sometimes called Obamacare, significantly reformed the American healthcare system. Among other things, the Affordable Care Act aimed to improve the affordability of healthcare insurance and lower the rate of uninsured people in America.[…]

Oh, and Miz Debbie is ready to get tough on them terrorists:

[…] On national security, Ross said it’s important for America to actively work with its allies and share intelligence. In America, she said law enforcement and intelligence agencies have to work in collaboration to root out home-grown terrorism. […] 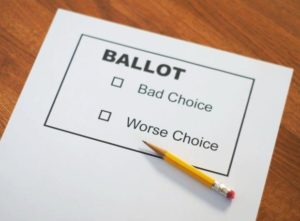 Oh, okay.  Your local police department teaming up with the CIA.  *What could go wrong there?*

Maybe she’s talking about more thoroughly frisking those old ladies in wheelchairs at the airport.  *As the former head of the state ACLU, she KNOWS those people are more dangerous than the head-scarf wearing ‘allah akbar’ howlers. *

.  We’re in a lesser-of-two evils scenario.  That surly women’s studies professor who screams at you for daring to hold the door for her vs. Mr. Bean.   WE ARE SOOOOOOOO SCREWED.