Jordan ” Lil’ Jordan” Shaw, spokesman for US Senate candidate Thom Tillis says we shouldn’t read too much into 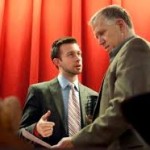 WHO wants to shower his man with campaign cash:

[…] Tillis spokesman Jordan Shaw said the campaign is trying to raise the money necessary to beat Democrat Kay Hagan and it is not concerned about the perception of raising money at Barbour’s firm. “I think the speaker has show a pretty clear track record of leading his own agenda,” Shaw said. “When you’re running a successful campaign you’re going to be attack by your opponents.” […]

Yeah. But what happens when that “agenda” pretty much consists of procuring cash for his personal and political interests?

Remember the amazing amount of success clients of his brother-in-law’s Massachusetts law firm have had with the state of North Carolina? (Tillis claimed he wasn’t real familiar with his brother-in-law’s practice.  But he sure did run to bro-in-law for help with his $200 paintball conundrum.)  How about the public proclamation of support for movie filming incentives just days before all kinds of movie studio money 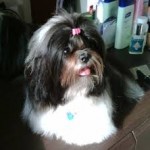 We’re offering kudos today to our favorite little dog  — John Drescher’s shih-tzu.  He surprised us by asking Kay Hagan some tough questions.  Now, he’s putting his access to the legislative building on Jones Street at risk by getting a little tough on Mr. Inevitability™:

A refrain is developing in the U.S. Senate race: The more money Thom Tillis comes across, the more problems he sees.

The House speaker is attending a fundraiser Wednesday at the offices of a Washington lobbying firm that will net him plenty of big checks but also may offer his rivals a political line of attack.

The firm? Barbour Griffith & Rogers Inc., otherwise known as the BGR Group. Former Mississippi Gov. Haley Barbour took flak for his firm, as critics linked him to its many clients. One particular client drew attention: the Mexican government. In 2001-2002, the firm lobbied “on immigration reforms sought by the Bush administration to provide a pathway to citizenship for illegal immigrants and expand a temporary worker program to allow immigrants to work in the U.S,” according to an Associated Press report.

Tillis’ fundraiser at the firm plays into the hands of Republican primary opponents Greg Brannon and Mark Harris, who are trying to paint Tillis as an insider with ties to special interest. (Democrats are doing the same.)

Brannon also has criticized Tillis on immigration, writing earlier this year in a Facebook post: “If Republicans want to re-take control of the US Senate we cannot nominate a candidate who will go along with the DC establishment and push through amnesty. My primary opponent has supported efforts to allow illegal immigrants to skirt immigration laws. We must have respect for the rule of law. I will never vote for amnesty.”

Brannon did not offer specifics to support his claim. But legislation to crackdown on illegal immigration in recent years failed in the N.C. House under Tillis’ control. Gov. Pat McCrory also vetoed a bill – later overridden in the House and Senate – that expanded the exemption of seasonal workers from the immigration status check program called E-Verify.

9 thoughts on “(#NCSEN) Lil’ Jordan: Thom T. will take money from ANYBODY”