Well, state House speaker and Republican US Senate nominee has wasted little time in announcing his goals — explaining why we should send him to DC for six years.

First, he declared that one of the top things he’d like to do — upon settling down in DC — is to chair the National Republican Senatorial Committee.     That sure did wonders for Elizabeth Dole, didn’t it?

The NRSC gig puts you in a position to get extra cozy with folks trying to buy influence in Capitol Hill’s upper chamber.  You get a lot of extra time playing politics, traveling the country, going on TV, and doing all kinds of other stuff.  The benefits to the folks back home, or for the economy and the nation, are a little suspect.

Here’s another apparent goal that we’ve picked up off of Twitter: 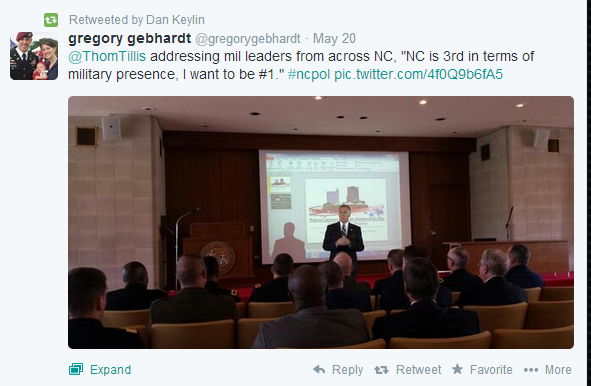 THAT is a bit of a head-scratcher.  On one hand, you could dismiss this as just one of the typical groveling, patronizing things politicians say out on the stump. (i.e.,  “It’s great to be here in Short Pump — eating Shorty’s barbecue, the BEST barbecue in this great state.”)  On the other hand, Tillis appears to be saying that he wants to increase the federal government’s footprint in our state. Don’t get me wrong.  I love the military.  I come from a military family, and have a lot of friends still serving.  But does increasing the active duty military presence in North Carolina make sense from a fiscal or national security standpoint?

A better idea to woo the military and veterans might be to sign on to reforming the VA — something like shuttering these nightmarish government facilities and implementing an insurance plan that allows vets to get their treatment in much better, private facilities. That’s got to be more efficient and cost-effective and humane.   Or working to roll back ObamaCare, taxes and regulations so soldiers can find a job when their enlistment ends, and their families can make ends meet.

I hope it gets better than this.