Well, it appears Robert Brawley’s political career on Jones Street — and his relationship with the NCGOP powers that be — swims with the fishes.  Just like Luca Brasi.

He got censured by his Republican colleagues today. What did Brawley do to deserve this? Did he form an alliance with Democrats to help them steal away the majority, thwart the will of the voters, and punish conservatives?    Nope.  He dared to point out that his caucus leadership abused their power by creating a monopoly for a fellow Republican legislator and his family. A state judge’s finding supported Brawley’s assertion.  Brawley also dared to accuse state House speaker and US Senate nominee Thom Tillis of manipulating the legislative process to benefit people who ponied up big to his campaign fund.  He also dared to publicly question a plan supported by Gov Pat McCrory and House Republican leaders to create a privately-managed toll road in Mecklenburg County.   Scandalous. 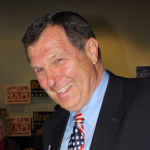 In a rare move to chastise one of their own, House Republicans took a vote of “no confidence” Tuesday to effectively remove a vocal critic of Speaker Thom Tillis from the caucus.

Rep. Robert Brawley, a Mooresville Republican, suggested Tillis orchestrated the move for his criticism of the speaker during the Republican primary for U.S. Senate.

“I do believe in representative government,” Brawley said in an interview, recalling what he told the Republican caucus ahead of the vote. “I do regret that this caucus is controlled like a dictatorship. The message loud and clear to the public is, ‘Say yes to the speaker or be censored, punished or pushed out.’ ”

Brawley is still a member of the caucus but he agreed not to attend the regular meetings if his fellow Republican lawmakers voted against him. The “confidence” vote was 52 to 11 against him.

“There were a number of members who felt uncomfortable discussing privileged information with him because he had the propensity to talk publicly about caucus matters,” said House Majority Leader Edgar Starnes, a Hickory Republican.

Brawley said Starnes told him Tillis “required the (caucus) session to be held.” […]

Interesting.  If leaking is a “crime,” why is Skip Stam still in the caucus? A former House member told me that Stam — when he was minority leader  — regularly met with top Democrat Joe Hackney to talk about the GOP caucus’ game plan.

Starnes had publicly endorsed Brawley for reelection in his May 6 primary fight with a Tillis ally.  About a week before the election, Starnes publicly revoked his endorsement of Brawley.  (Brawley lost his renomination fight by about 100 votes.)

This story sounds quite similar to 2006.  Mecklenburg Republican John Rhodes was making headlines raising ethics questions about then-House Speaker Jim Black and his Republican co-conspirator Richard Morgan.  Rhodes — named the previous year as Legislator of the Year by Americans For Prosperity — suddenly found himself in a primary with a guy named Thom Tillis.  A lot of special interest money flowed into the race, and Rhodes was defeated.

Rhodes was vindicated by the federal indictment and conviction of Black, and Morgan’s 2006 reelection loss.

This episode with Brawley — like the 2006 Rhodes episode — is meant to send a loud-and-clear message: Shut your mouth and play along, or get crushed.

We got a lot of lip service in early 2011 about how things were going to be different on Jones Street.  It appears we’ve got the same game with different players.   It appears — folks — that we are on our own.