One of the Tar Heel State’s smallest counties is speaking pretty loudly this week.  Gates County is on the border with Virginia in the northeastern quadrant of the state.   It’s county GOP organization has jumped head-first into the GOP primary for the US Senate.  Check out this statement from the county GOP’s Facebook page: 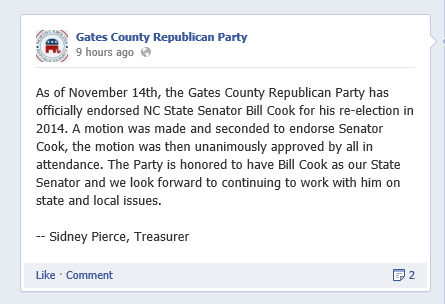 THIS is not likely to sit well in certain pockets of Wake and Mecklenburg counties.  State GOP documents pay lip service to the concept of neutrality by party officials in GOP primaries.  It will be interesting to see WHO has the gall to question this move by Gates County Republicans.

This episode needs to be a wake up call for the GOP establishment in this state.  There is a real anger — a fire — burning among the folks outside the Raleigh beltline.

Senator Bill Cook has been an anti-establishment force during his tenure in Raleigh.  He’s helped the GOP make inroads in what for years was Marc Basnight country.  He made it to the state House after slugging it out with the party establishment.  They gerrymandered his district.  He decided to run for the Senate — once again battling the GOP establishment and barely knocking off Marc Basnight’s hand-picked successor in the general election.  (Cook’s November 2012 Democrat opponent has announced that he will be seeking a rematch in 2014.)

Greg Brannon was one of the earliest Tea Party leaders in North Carolina.  He’s drawn the ire of the state party establishment — and the attention of establishment hitman Karl Rove.

The folks at NCGOP HQ need to pay close attention to what has happened here — and to what is reverberating across the state.  They can choose to use a heavy hand to slap down these people in Gates County. Or they can listen and learn — taking those lessons to heart in order to avoid a full-blown split in the party and a disaster in 2014.