Dick Burr has a reputation for not being the brightest bulb in the pack.  Back during the financial crisis, he took some heat for advising people to go to the ATM and take all their money out.   When Ted Cruz and Mark Meadows were fighting tooth-and-nail to defund ObamaCare, Burr publicly derided the idea as “the dumbest [he’d] ever heard.”

Now comes THIS from the Twitter-verse: 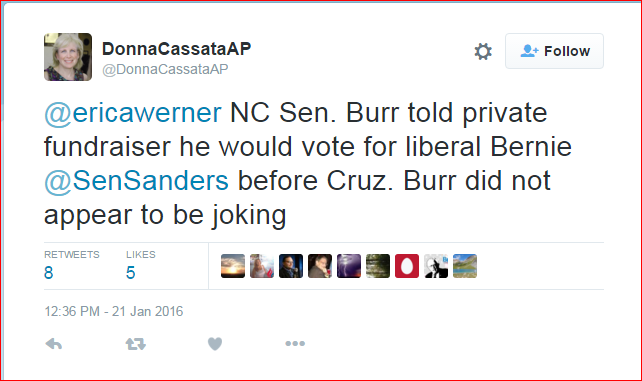 Donna, in case you don’t know, is a DC correspondent for the Associated Press. She recently penned a column talking about the PR problems Ted Cruz has with his fellow senators.

Some of you may not be aware that Bernie Sanders actually ran for mayor, the US House, AND the Senate as

a Socialist.  The Democrats were too wussy for him. He is running in the Democrat primary for president even though he is not registered with them.  And here — apparently — is our senior REPUBLICAN senator suggesting he would vote for a Socialist for president before he’d vote for a rock-solid conservative like Ted Cruz. 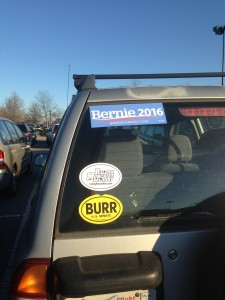 ber the heat Greg Brannon took in the 2014 US Senate race for writing in Ron Paul in the 2012 presidential race?  At least Paul was a Republican.

Remember the heat Brannon took for not coming out and publicly endorsing Thom Thilli$ in the general election?

We conservatives take all kinds of heat — from people like Dick Burr –  if we dare to suggest we might not come out and support the GOPe lightweights we get saddled with year after year. This is the same kind of crap the Rockefeller folks did to sink Goldwater in 1964.  This is the same kind of thing they tried against Reagan in 1980 with John Anderson’s independent run.   It looks and sounds like that party loyalty thing is a ONE-WAY street.

Thank goodness we have THREE other choices in the 2016 US Senate primary here in North Carolina.

44 thoughts on “#ncsen: Burr prefers Bernie over Ted? (That’s what the AP says.)”