Yep.  Click HERE to listen to Burr campaign spokeswoman Mary Comer spin this nonsense.  Here are some of the,um, highlights:

While the Democrats running for U.S. Senate will face off twice, the Republicans running for Senate and governor won’t appear in debates before the March 15 primary.

That’s because the incumbents, Gov. Pat McCrory and Sen. Richard Burr, have declined to debate their GOP challengers, according to Time Warner Cable News, the network that sought to host the debates along with the League of Women Voters.

“Both of those campaigns said they would not entertain invitations to primary debates, only debates for the general election,” news director Rick Willis of TWC News said Thursday. 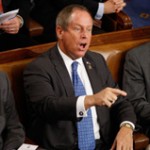 I think South Carolina congressman Joe Wilson would like to have a word with Ms. Comer.

23 thoughts on “#ncsen: Burr camp says NOT refusing to debate. (They say NO ONE has invited him to debate.)”