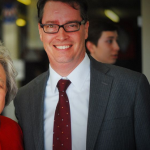 Some people get cheese products or over-the-counter pain medicine as consolation prizes.   Come in second in the race for NCGOP state chairman?  You win A NEW JOB:

Governor Pat McCrory has selected Craig Collins of Gastonia to fill a district court vacancy in Gaston County. The vacancy was created by the passing of Chief District Court Judge Ralph Gingles, Jr.

Collins has been practicing law at the Law Office of Craig Collins since 2007. Prior to that, he worked at the District Attorney’s Office in Gastonia for nine years as an Assistant District Attorney, where he was the Chief District Court Prosecutor and Lead Drug Prosecutor.

Collins has prosecuted and defended thousands of cases in Juvenile, District and Superior Court, ranging from minor traffic violations to First Degree Murder. He has represented parents in Abuse and Neglect Court and worked as the local Supervising Attorney for a federal grant program that helps prosecutors combat domestic violence.

Collins earned a Bachelor of Arts degree from the University of Pittsburgh in 1994 and a Juris Doctorate degree from Villanova University School of Law in 1997.

Hmmm.  Sounds like he got a better deal than Hassan.  He gets to throw people in jail, and fix traffic tickets.  The Republican Party chairman can’t do any of that.