I stumbled across a troubling story this weekend involving one of our local companies here in Moore County., If even a nugget of it is true, there are a lot of heads that need to roll.  A LOT.

It was about that time we started hearing stories about the bomb dogs being snatched from soldiers by the firm.  Some may ask: So what?  What’s the big deal?

At one time, I was asking those same questions.  When I was a driveby, I kept noticing how cities and counties were giving retired drug dogs to their handlers.  My research showed that the cost of the acquisition and training of each dog ran into the high five-figure, low six-figure range.  Why would they be giving away such a valuable asset?

I talked with a trainer who specialized in these kinds of animals for insight.  The dogs are trained to work with a specific person.  The handler AND the dog go through training together.  A bond develops that makes it extremely difficult — practically impossible — to transfer the dog from one handler to the next.  So, in the end, it makes it much easier to transfer the dog to the handler when their official time together is done. 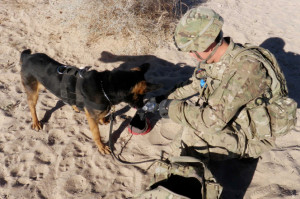 Well, this weekend, The New York Post produced another story about dog-snatching from troops involving K2 Solutions.  Some of the troops had been seriously wounded and had been wanting to adopt the dogs as they left the service on disability.  Many were offering to PAY.  An adoption process was formalized, but many of the soldiers who followed the procedure ended up being told ‘Sorry, your dog is gone.’

Media reports indicate some of these dogs turning up in a Virginia kennel, and in the homes of Pentagon officials.   Here’s one wounded soldier’s account of his reasoning behind seeking his canine partner:

“We got blown up together,” he says of his dog. “Before I was even done with training, I knew I’d try to adopt him.”

If you read the articles on this, you’ll find anecdote after anecdote of soldiers and their dogs enduring some hellish scenarios together.  These folks endure long absences from family, crappy pay, even crappier health benefits, The V-frickin-A, and threats to life and limb all for a paycheck and a love of country.  Giving them their damn dogs, who went to hell and back with them, is the least you can do for them.

K2 has gone on somewhat of a PR offensive.  Their head honcho spoke with our local Pulitzer Prize-winning newspaper.  K2 has also published a statement on the home page of their web site.

Oh, by the way, there IS a federal law on the books since 2000 giving soldiers the first right of refusal on adopting their dogs.

The PR and spin need to cease, and some serious action needs to be taken.  The powers-that-be in DC need to get to the bottom of this.  Somebody needs to answer for this slap-in-the-face to so many of our bravest.

One thought on “A doggone travesty”