The mainstream media could do the right thing and cover the upcoming Senate contest in terms of the issues. Inform the voters, keep their readers / viewers up to date — that kind of thing. Or they could be lazy and cover it in terms of the dollars chase.

Looking at the dollars chase, a troubling development rises to the surface.  The two candidates anointed by the media and the establishment — Kay Hagan and Thom Tillis — have campaign treasuries stuffed with large contributions from out-of-state and shadowy sources.  If you’ve got six figures coming in to you from large, shadowy and out-of-state interests, who are you going to listen to when the 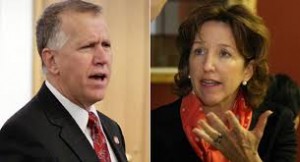 Kay Hagan’s largest donor appears to be  Emily’s List — $404,000 over the span of her career in DC (2009- the present.)  She’s stacked up all kinds of donations from Harry Reid’s Vegas buddies, Chuck Schumer’s Park Avenue pals, Hollywood and lobbyists.  She’s taken in quite a bit of Planned Parenthood dollars — a fact which she tried to hide.    We’ve found at least six different entities — FIVE of which are based out of state — raising money for Hagan.

There are also problems when you examine the campaign finances of media-anointed GOP frontrunner Thom Tillis:

A small North Carolina-based super PAC with ties to a Republican Senate candidate reported two donations from LLC shell corporations today. While corporations and labor unions can make direct, and unlimited, contributions to these committees, they must be identified by the recipients. But if the donor company itself is shrouded in secrecy, that transparency evaporates.

In this case, however, a review of corporate records reveals the likely sources of money — a total of $50,000 — to be a car dealership and the chairman of a direct-selling company.

Grow NC Strong, a super PAC founded last May, reported raising $159,000 in 2013, and spending about $64,000 on consultants and overhead. The group made no independent expenditures on behalf of a candidate, although the group’s website proclaims support for Thom Tillis, a Republican challenger to Sen. Kay Hagan (D-N.C.).
According to the filings made this morning, the group raised $54,000 in the second half of the year, including $25,000 donations apiece from Dawn Properties LLC and TC Investor LLC. Simple Google searches on the companies don’t reveal much, but North Carolina corporate filing records shed more light on who is behind these donations.
According to the state’s records, Dawn Properties LLC shares an address and ownership with Randy Marion Automotive LLC, which was founded by Randall Marion, of Mooresville, N.C. Marion operates a chain of car dealerships, selling GM and Subaru cars.
TC Investor LLC is slightly more mysterious. According to state records, it is registered by a corporate agent company that effectively shields the founder’s name.
However, another LLC is listed as the company’s manager — Praescient LLC, which is registered at a rented UPS mailbox. State records show that Praescient’s registered agent is a Charlotte, N.C., attorney and its manager is a man named Robert Stevanovski; his wife, Sonya Stevanovski, is listed as a member. Both Marion and Stevanovski, and their wives, have contributed the maximum $2,600 apiece to Tillis’ primary effort this election cycle.
Stevanovski is chairman of ACN Inc, a company that provides energy and telecom services around the world, but using a “direct selling” method, which recruits independent sales representatives who then recruit other representatives.

In June, ACN President Gregory Provenzano gave $5200 to The Tillis campaign.  His wife donated $2600.  Also in June, the Tillis report shows Anthony Cupisz of Michigan, ACN’s co-founder, made two donations of $5200 to the campaign.  David Stevanoski, ACN’s VP, gave $2600 in June — as did Lynn Stevanoski.

This isn’t the first time the super PAC has reported donations from a shell corporation. In June, it received another $25,000 donation from a Georgia-based company called “Standard Holding Corp.” Georgia state corporate records do not show a company by that name, but North Carolina records do, listing a Charlotte businessman named George Sywassink Jr., as managing member. […]

Sywassink? Where have we heard that name before.  Ah, yes.  Tillis put him on the UNC Board of Governors.  The House GOP caucus initially voted Sywassink down — because he lives in South Carolina.  But he got approved later when Tillis sent out a list of preferred candidates.

If Tillis and Hagan make it to the general election, you have to ask both candidates:  What are all of these people investing these big dollars in? What happens if our interests run contrary to THEIRS?

2 thoughts on “#NCSEN: Bought and Paid For?”