I’ll have to admit we were caught off guard around here. But Twitter lit up over the news this morning: 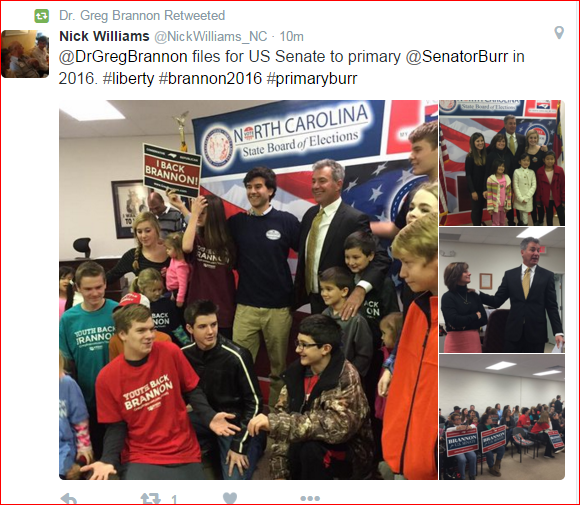 The last we heard from this guy — he was on the losing end of a divisive, bitter 2014 US Senate primary and things weren’t looking too promising in a certain court case.  However, the Cary OB-GYN has apparently stepped back into the spotlight with a vengeance in a year dominated by an angry electorate that may be more receptive to his rebel style.

If he wants this go-around to be more successful, he needs to learn TWO valuable lessons from 2014.  First, the lawsuit and its ensuing news coverage raised serious questions about his integrity.  Brannon needs to put that legal matter to rest and do something to restore voter confidence.

Second, he needs to take THIS advice from a Charlotte-based conservative writer:

[…] Brannon didn’t connect with people as well as he needed to, especially during the debate on April 22 at Davidson College. It wasn’t his Tea Party ideas that turned people away—those are quite popular in the state. It was his personality and his approach, which I saw firsthand at a fundraising event with Sen. Mike Lee. While Brannon could quote the Constitution like no one else—something Lee praised him for as he introduced him to the small, mostly older crowd—Brannon came across as somewhat heady and disconnected from the people in the room.

During the debate at Davidson, Brannon quoted the Constitution 15 times right out of the gate. While Harris and Army nurse Heather Grant talked about personal issues or made practical applications, Brannon often focused on the Constitution, which made him seem academic and even harsh at times, especially compared to the others. Don’t get me wrong. The Constitution is central to the conservative message, but Tea Party candidates can get their point across about freedom and about what the Constitution says without sounding like a lawyer or a legal scholar.

Too often, Brannon sounded like a biblical scholar trying to evangelize to the downtrodden or even the skeptic by quoting Scripture at them. For example, when asked about what Republicans need to do to be successful in campaigns and governing, Brannon said, “I believe this is the question. It’s what the Constitution is, what the Republic is. The Constitution restrains the federal government, gives it 18 functions in article 1 section 8. . .” Meanwhile, Harris connected with the audience, making eye contact with them and talking about standing for what you believe.

When asked about immigration, Brannon brusquely said, “First thing, no amnesty. Our citizenship is precious and special. In the Constitution article four, section four, it’s the federal government’s role to actually protect sovereign borders.” The other candidates kept it simple, even personal, and talked about the need to close the borders first so people can be protected.

The impact on some voters was to turn away from Brannon to other candidates—not because they were pro-establishment or swayed by Karl Rove’s millions and not because they disagreed with Brannon. But they found him to be personally disconnected and they put their vote toward someone else.

Bill Janning, a retired Marine and Aerospace Field Service Engineer for Boeing who lives in Jacksonville, N.C., supported Brannon at the outset, but after the debate, he decided to vote for Harris.

“Brannon absolutely stood for a lot of things that I believe in—more so than Tillis,” Janning said. “He stands for the Constitution. I support that. I also agree with him on social issues. He’s right there. He can quote the Constitution backwards and forwards, but I think in the debate that was a negative. In my opinion he is not very effective in projecting his feelings without alienating some people. I think he lost connectivity with the people. It’s not that the people aren’t interested or that they don’t believe in what he’s saying, but they want to hear it in a more practical and personal way. I got that from Mark Harris. He was the one I connected to the most and that’s why I ended up voting for him.”

Brannon SO NEEDS to take those words to heart if he wants a better result than what 2014 offered.  Richard Burr is a disappointment in so many levels. (The senator and I share a number of mutual friends in the Winston-Salem area.  They’re even privately expressing disappointment in him.)

Brannon needs to use his amazing communication skills to explain to the electorate WHAT is wrong in Washington, and how Tricky Dick has aided and abetted it all. How Burr is more willing to pick a fight with Ted Cruz than he is with Barry Obama.

Brannon is well-versed and well-educated enough to make this campaign a lesson on the virtues of limited government.  And there’s not a damn thing wrong with that.