Hear it in their own words: 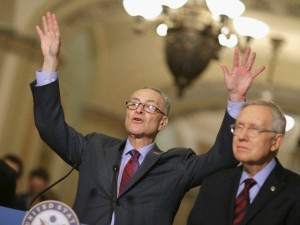 […] The Democrats’ victory, and Republican Ryan’s defeat, was garishly displayed when his omnibus got more Democratic votes in the House and in the Senate than it got Republican votes.

“I said I would not accept a lot of [conservative] ideological riders that were attached to a big budget deal,” President Barack Obama said Friday, at his end-of-year press conference. “And because of some terrific negotiations by the Democrats up on Capitol Hill and I think some pretty good work by our legislative staff here… it was a good win,” he said. “We met our goals,” he said.

That’s right. Barry Obama “met [his] goals” as a result of this legislation that passed a REPUBLICAN-CONTROLLED CONGRESS.  (MORE: ) 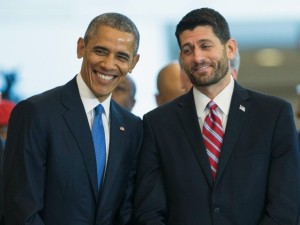 […]In 2015, “we wanted to get rid of sequestration, we were able to do that,” gloated the Democrats’ leader in the Senate, Sen. Harry Reid (D-NV). “We wanted to make sure there is parity between defense and the middle class, we wanted to make sure that we kept these poison pills off the legislation… All three goals we had, we accomplished,” he said. Ryan’s omnibus deal “caps off a successful year for Senate Democrats,” he added.

“Well, if you would’ve told me this year that we’d be standing here celebrating the passage of an omnibus bill, with no poison pill riders, at higher [spending] levels above sequesters than even the president requested, I wouldn’t have believed it, but here we are,” Democratic Sen. Chuck Schumer told reporters shortly after the $1.1 trillion omnibus bill was passed. 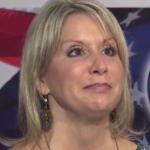 “Almost anything, the Republican leadership in the Senate achieved this year, they achieved on Democratic terms… Democrats had an amazingly good year,” he declared.

“Poison Pill” is a code-name for conservative legislation.  So, the REPUBLICAN-CONTROLLED Congress gave Obama more money than what he asked for and kept all those *nasty* conservative thingies out of there. MORE:

Over in the House, the Democrats’ upbeat press conference began with laughter, according to the transcript.

Some of you, for the second time this morning – thank you for coming by. We’re very pleased to say that today, we delivered sweeping victories for hard-working American families. The Omnibus bill makes vital investments that will create jobs, strengthen our future and grow the paychecks of American people… We passed the best possible, under the circumstances, appropriations bill… the Republicans’ obsession with lifting the oil-export ban, they really gave away the store. Democrats were able to strip scores and scores of poison pills, destructive poison pills, some of which they had to have, which they ended up with not having… it is a monumental improvement… But again, we feel very, very good about what it is.… and thank the Speaker for his cooperation.

You can watch it all here, including the claim by Maryland Rep. Steny Hoyer (D-MD), the Democrats’ deputy leader, that “this was an extraordinarily big victory.”

All three of our House Democrats voted FOR THIS.  (No surprise, there.) Here are the Republican offenders who voted FOR THIS:  Renee Ellmers, Patrick McHenry, Virginia Foxx, David Rouzer, and Robert Pittenger.

Remember this when they come around campaigning about how hard they fought Obama, and how they fought to kill ObamaCare, how shocked they were at those Planned Parenthood videos, and how they stood strong against amnesty. They’re all lying.

17 thoughts on “Dems– STILL the minority — celebrate their Omnibus victory”