It’s come out that at least one of the San Bernardino shooters pledged allegiance to ISIS prior to partaking in the slaughter of those innocent people at the county building. And how did the “honorables” on Capitol Hill — that Republican majority — react? Let’s see:

[…] The amendment, offered by Sen. Rand Paul, would have suspended visa issuances to more than 30 Muslim countries with active Jihadist populations. Graham and Rubio were both members of the Gang of Eight, which proposed legislation that would expand Muslim immigration, and Paul and Cruz were both opponents of the Gang of Eight bill.

Graham and Rubio’s vote against curbing Muslim migration follows the attack in San Bernardino. The male suspect, Syed Farook, is the son of Pakistani immigrants; and the female suspect, Farook’s wife, Tashfeen Malik, was a Pakistani native. According to CNN, the two met, “when he [Farook] had gone to Saudi Arabia in 2013 on the Hajj, the annual pilgrimage to Mecca that Muslims are required to take at last once in their lifetime. It was during this trip that he met Malik, a native of Pakistan who came to the United States in July 2014 on a ‘fiancée visa’ and later became a lawful permanent resident.” 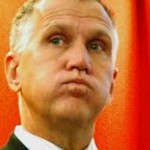 As The Hill newspaper writes:

Paul’s amendment would place a ‘pause’ on issuing visas to more than 30 countries, that the Kentucky Republican said are ‘at a high risk for exporting terrorists.’ It would also require that individuals from countries that participate in the Visa Waiver Program to either wait 30 days before coming to the United States or go through enhanced background and security checks, as well as requiring the government to perform additional screening on any admitted refugees. […]

Let’s see.  No Lindsey Graham (R-SC) or Tim Scott (R-SC).  No Richard Burr (R-NC) or Thom Tillis (R-NC).
Somebody must have whispered the words “government shutdown” and spooked all of those RINOs.  ( I might be able to understand Tillis not voting for it. There’s no money to be made.)

Burr, up for reelection in 2016, likes to tout his position as chairman of the Intelligence Committee and his alleged expertise on foreign affairs and national security.  Failing to support an amendment like this would indicate a serious lack of “Intelligence.”

You can be like sheep and fall for his slick campaign ads and mailers touting his alleged conservatism.  And vote to send him back for six more years.   Or you can use your sacred privilege of voting to send Tricky Dick a much-needed and deserved message.

32 thoughts on “#ncpol: ONLY TEN senators (None named Burr or Tillis) vote to clamp down on visas for folks from jihad countries”