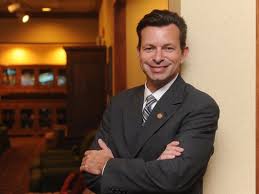 Gov. Pat McCrory and Senate nominee Thom Tillis and state House president pro tem Skip Stam have all told us to BEND OVER and wait for those toll roads.  They’re coming.  But Asheville’s Tim Moffitt (R) — locked in a tight reelection fight for the state House — says NOT SO FAST.

“First of all, it’s just been conversations that have happened.  No commitments have been made,” the Asheville Republican can be heard saying.

Well, what about the signed contracts between the state and that Spanish company, a constituent can be heard asking.

“Contracts?,’ says Moffitt.” With the DOT?  Those can be cancelled out.”

The legislator continues: “What does that matter? We control the purse strings. Any executive branch agency can sign any contract they want. It’s up to the General Assembly to provide the funding for it to allow it to go forward. The legislature has not made a commitment.”

10 thoughts on “#ncga: Rep. Moffitt says I-77 toll contracts “can be cancelled out””