This is *rich.*  We’re bombarded with ads from Republican candidates telling us incumbent Democrat senators did a bad thing by voting FOR ObamaCare.  (And we agree.) So, does that mean a GOP majority on Capitol Hill will repeal ObamaCare?   (*crickets*)

Hmmm.  One more time — Does that mean a GOP majority on Capitol Hill will repeal ObamaCare?

From what I am seeing and hearing — the answer is a big, fat NO.

Senate Minority Leader Mitch McConnell (R-KY) downplayed the prospects of repealing Obamacare if Republicans win control of the Senate next week, which they are slightly favored to do in numerous forecasts.

Appearing Tuesday on Fox News, he was asked by host Neil Cavuto if he’d push for “defunding and getting rid of the Affordable Care Act” as majority leader.

Oh, and it gets *better.*   Listen to THIS DC GOP establishment toadie:

[…] “Senator Cruz has been rather quiet over the past few months,” said Ron Bonjean, a spokesman for Trent Lott when the Mississippian was the Senate Republican leader. “That time seems to be coming to an end. I understand why he’s eager to go after Obamacare. But the reality is that it’ll take 60 votes to repeal it and Republicans will have nowhere near that amount. If Obamacare remains the focus, he will certainly get the base jazzed up about what he’s doing, but he won’t get rid of the law.” […]

(Thom Tillis is running ads against ObamaCare.  But he talks about favoring “Medicaid expansion” — aka “ObamaCare implementation.”  ) 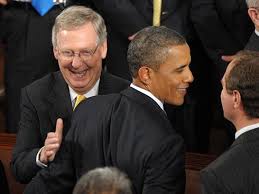 Why not MAKE a defeated, smaller Democrat caucus OWN this travesty?  Go full-throttle for repeal.  Make them stand up in front of God and country and explain why it needs to stay. Save that audio and video for 2016.

The Dems fought George W. Bush tooth-and-nail from 2000-2006 while they were in the minority.  THAT got them a majority in 2006 and a president in 2008 — which then allowed them to shove a whole lot of their black magic, like ObamaCare, down our throats.  The left sees what it wants, and pushes for it over and over and over until they get it.  Hell, the Dems talked Ronald Reagan into signing a tax increase!

I think these sound bites from Bonjean and McConnell are great hints that the GOP establishment is just fine with ObamaCare.  They enjoy controlling and micro-managing people’s lives as much as the statists on the other side of the aisle do.  The deeper your claws are sunk into the economy and other people’s lives, the more opportunities for collecting cash and other goodies pop up.

Voting for an R over a D is not going to fix this mess.  Getting in their faces – -and staying there — is what’s needed to get the job done.

5 thoughts on “But, but, but BARRY won’t let us throw out ObamaCare!”