Senator Jerry Tillman (R-Randolph), that chamber’s majority whip and leading voice on education policy, has stepped up in defense of anti-Common 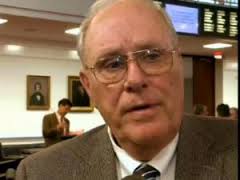 Core legislation he shepherded through the Senate.  Tillman told us his commitment to killing off Common Core — and that of the Senate Republican caucus — has not wavered:

Common Core is not in the best interest of our state and its children’s education.

Both of the bills also direct the State Board and the Academic Review Commission to review the current standards which are based on Common Core, and make changes so that a new set of standards would do the things that the Common Core standards cannot do: increase student achievement, reflect NC’s priorities, be age-level and developmentally appropriate and understandable to parents and teachers, and be among the highest standards in the nation.

There has been mention of a concern with Section 5 of Senate Bill 812 as it relates to Smarter Balanced Consortium Assessments, etc.  The language specifically states that the State Board of Education shall report to the Joint Legislative Education Oversight Committee prior to the acquisition and implementation of a new assessment instrument…and that the State Board shall not acquire or implement such an assessment instrument without the enactment of legislation by the General Assembly authorizing the purchase.”