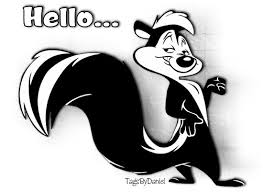 with the habits of the common American skunk.  When those creatures get cornered, or feel threatened, they wildly spray their stink all over everyone and everything in the general vicinity.

Well, it appears a Charlotte-based drive-by has the goods on House Speaker Tim Moore.    His reporting has been pretty solid — based an awful lot on the documents Moore’s campaign filed with the state board of elections and information on the NCGA website.

Instead of stepping up and talking about the facts, Moore and his team have decided to adopt the tactics of the typical spooked skunk.  They are spraying misinformation and invective and all kinds of other stink on this reporter — and even Moore’s campaign treasurer.

Sources told us that Moore had his stooges send out an email warning Republican caucus members to NOT talk to this Charlotte TV reporter.  (That has since been confirmed by a report from said TV station.)

NCGOP executive director Dallas Woodhouse has even been drafted into the effort to smear this TV reporter.  Let’s go to the NCGOP Twitter account: 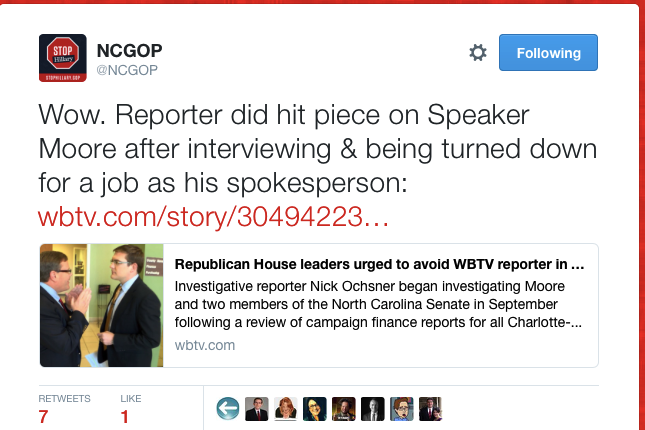 The problem with that?  The TV station has a totally different story:

Republican members of the North Carolina House of Representatives were advised Wednesday to not speak with a WBTV reporter who is investigating Speaker Tim Moore (R-Cleveland) over his failure to itemize campaign expenses made with credit cards.
Investigative reporter Nick Ochsner began investigating Moore and two members of the North Carolina Senate in September following a review of campaign finance reports for all 43 Charlotte-area lawmakers.
[…]
On Wednesday, Representative Charles Jeter (R-Mecklenburg), who is the House Republican Conference Chair, emailed all Republican representatives instructing them not to talk with Ochsner.
“I wanted to follow up on the Speaker’s note from the weekend. If Nick Ochsner the reporter contacts you I urge you to not take his calls. If you did not know he applied to be Tim’s Comms Director,” Jeter wrote in the email. “If you are asked about your campaign finance report or have questions about your expenditures please reach out to Madison for help.

Oh, goody.  The point man on this is a guy who has a lobbyist operating out of his private business’s offices.

Here comes Dallas to, um, save the day:

[…]Jeter’s claim that Ochsner applied for a job with Tim Moore is the same accusation made by Dallas Woodhouse, executive director of the North Carolina Republican Party.
Woodhouse emailed WBTV News Director Dennis Milligan on Wednesday about the alleged conflict of interest.

“Dear Dennis: I am Dallas Woodhouse, executive director of the North Carolina Republican Party and I’m (sic) got some concerns about your reporter Nicholas Ochsner having a conflict of interest regarding reporting on State House speaker Tim Moore,” Woodhouse wrote.
“Are you aware that just a few months ago he applied to be the house speakers (sic) official spokesman? He was actually interviewed for the position over the telephone he was not offered the job. should (sic) you want to see a documented paper trail on this issue I am able to provide one.”
[…]

The problem with Dallas’s spin? (Besides the appalling grammar?)  There’s an email trail showing that Moore’s team approached Ochsner about the job — NOT the other way around:

Emails between Ochsner and an aide to Moore, Michael Luethy, that Ochsner provided to station managers prior to Woodhouse’s email show that Ochsner was approached about the position in early December.
Luethy sent Ochsner an email with the subject line “Communications Director” on December 11, 2014.
“Are you interested in the Communications Director position with new NC House Speaker Tim Moore?” Luethy wrote. “He is hiring a communications director for his office, and Matt Bales forwarded your resume to me with his strong recommendation. If you are interested, please let me know a good time to talk as soon as possible.”
Ochsner responded less than an hour later. 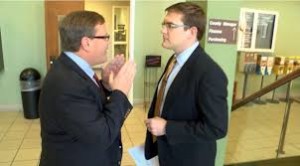 “I told Matt I’m interested in talking about the opportunity. I’d love to discuss it with you. I’m in the car for about the next hour and have some time to talk now or I should be free later today between 2-4,” Ochsner wrote.

According to both the emails and Ochsner, the two spoke on the phone later that afternoon.
“I was approached about a position with Speaker Moore,” Ochsner said. “At the time, I was looking to relocate to Charlotte to be with my wife and was actively interviewing at several TV stations. I told Michael that I was looking to be in Charlotte and not Raleigh and that seemed to end the conversation.”
Ochsner said he never heard back from Luethy about the job and never filled out an application but Woodhouse said the Republicans’ interest in hiring Ochsner should disqualify him from reporting on issues related to the North Carolina General Assembly.

Whaaaaaaaaaaa?????  You guys approached HIM.  If Dallas’s warped logic holds, he should offer a job to EVERY member of the Capitol press corps.  THAT would take care of a lot of, um, “problems.” MORE:

“It seems to me this is an extreme conflict of interest that should prevent the reporter from covering the man whose office recently rejected him for employment,” Woodhouse wrote in his email. “At a minimum it seems this would require some type of disclosure in your stations report. As a former television news reporter with a decade in the news business I can’t imagine that this is not a serious conflict that has the appearance of impropriety.”

Milligan said Ochsner disclosed the interest from Moore’s office about the position to news managers prior to running the story. It was determined that the conversation did not represent a conflict of interest.
“Being approached about a job and having a phone call with an interested potential employer is not a conflict of interest,” Milligan said. “Nick’s reporting has been fair and based on facts. I welcome all scrutiny of the facts of the story.”

Exactly.  Ochsner did his job.  And he only scratched the surface.  He has yet to touch on our findings that Moore has apparently been (1) paying himself out of his campaign fund, and (2) paying rent out of his campaign to himself for property that he owns.

THIS is not about the “liberal media.”   (THAT is Ms. Leslie.  Binky — when he is not playing pocket-pool or fetching Ms. Leslie’s coffee — is the “clueless media.”)

Ochsner is a former College Republicans president.  The same goons who are now trashing him tried to hire him earlier.

This is about the ethical decay among our leaders on Jones Street.  The longer you hang around up there, the more likely it seems your ethics go right out the window.  Republicans promised a change from business-as-usual when they took over in 2010.  The only thing it appears has changed is the set of hands that have been caught in the cookie jar.

Trading the Republican majority for a Democrat majority will not fix the problem.  We need to get the GOP ethics house in order.  If it requires cleaning house in caucus and party leadership to get it done, DO IT.

8 thoughts on “#ncga #ncgop: Rolling out the spooked skunk strategy”