The N&O tells us there are still ‘quite significant’ disagreements in the state budget talks between the GOP-led House and GOP-led Senate.  (According to Fox and Friends, our governor is staying out of this — preferring to spend his time tubing on some river.)

Speaker Tim Moore has made it clear that the House caucus will live or die at the hand of Cary’s Nelson Dollar.  Dollar has been pretty clear that he wants to spend MORE money and will not budge on anything.

Is the trick to force people to throw up their hands in frustration and  stick with last year’s budget.  It’s more conservative, but does include solar subsidies.  (And we know how many people on both sides of the aisle are out there drooling over that gravy train.)

Moore issued some hopeful tweets over the weekend indicating that he thought the end was near on the budget standoff.  But he’s now changing his tune:

It didn’t take long for that prediction to be revised.

“It will take central staff a couple of days to log updates once a final agreement is reached,” the follow-up tweet cautioned. “We hope to have a Conference Report by end of this week.”

Later in the day, Moore jokingly blamed his press secretary for the tweets and offered a less sunny update.

“The list of differences is starting to narrow, but the differences remaining are still quite significant,” he said.[…]

Wow. Taking a play from the Robert Pittenger playbook. (When the heat is on, blame a female.)

It appears the “conservative revolution’ IS fighting over tax cuts and being supportive of MORE handouts:

And while Moore and Berger both said progress was made over Labor Day weekend, there apparently weren’t any breakthroughs on tax issues. The Senate has sought to lower personal income tax rates, but the House hasn’t approved any major tax changes.

“We’re not very close on tax policy right now,” Moore said, adding that those issues could get 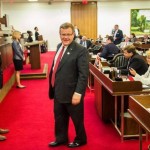 left out of the budget deal. “Having a tax plan is not critical to the budget passing.”

He said House leaders have agreed on $110 million in tax cuts, a change the Senate demanded to offset Division of Motor Vehicle fee hikes. But the details of the tax cuts aren’t resolved.

One area where agreement has been reached this week deals with grants for film productions. Both chambers’ negotiators agreed Tuesday to $30 million a year in grants to lure film-makers to North Carolina. That’s triple the size of the current program, and is the amount the House sought.

“I think we can now say that North Carolina’s film industry is officially back open for business,” said Rep. Ted Davis, a Wilmington Republican.

*It warms my heart that Ted Davis is happy.*

Now that the handouts have been increased three-fold, there should be even MORE unionized Hollywood types pouring into our fair state.  (Um, Yay?)

2 thoughts on “#ncga: Nelson STILL ain’t happy. (But movie incentives are BACK!)”