The House committee dealing with election reform reported out a committee substitute to S486 yesterday.  Those of you who follow state politics closely know that Rules Committee Chairman David Lewis (R-Harnett) is the elections guru for the House majority.

One provision in the bill that is especially intriguing is,um, THIS ONE:

The stuff that is underlined is what has been added by the committee.

I am told by folks in the know about election equipment that the $10 million bond provision basically prices out all potential competitors for the state’s business and protects the existing monopoly held by Printelect of Craven County and its partner Election Systems & Software.

Said one of my sources:

“They are the only folks in the game who can afford to pony up that much money up-front.  The bond doesn’t need to be that high.  What are the odds of having to do a whole new election statewide?  I can see a handful of precincts or a few counties. Competition benefits the taxpayers.  It provides options and drives down costs.  This slams the door on any possible competition.”

As a comparison, Virginia only requires a bond of $10,000 per line of equipment.  In other words, ten grand gets you in the game in The Old Dominion.  TEN MILLION gets you a seat at the table in The Tarheel State.

Here is some reporting on Printelect and ES&S by Civitas from 2015:

[…] I wrote a blog about Owen Andrews way back in 2010 when the Democrats controlled the legislature and the governor’s mansion. According to my blog;

“The News and Observer and the Charlotte Observer have concentrated on the fact that Printelect prints the majority of ballots used in every election in NC (86 out of 100 counties) and that they charge considerably more than other printers.  They have also pointed out that Printelect is the sole agent for Election Systems and Software (ES&S).  ES&S is the only certified election equipment vendor in NC.

Some more facts mentioned in their articles: “Printelect is a subsidiary of Owen G. Dunn Company in New Bern.  The company’s president, Owen Andrews, is a

long-time friend of Governor Perdue and Gary Bartlett, Executive Director of the State Board of Elections.” Bartlett shared an especially close relationship with Andrews, even going on ocean fishing trips on Andrews’s boat.”

I went on to write in my blog that the media had not mentioned the fact that Printelect programs the voting machines for North Carolina counties. “So it will not only sell the voting equipment to all 100 counties, and print ballots for 86 counties and provide equipment maintenance services, but also program the equipment to record the votes cast.”

And nothing much has changed in the world of elections when it comes to printing ballots and buying and selling voting machines. Owen Andrews’ Printelect is still the solitary agent/vendor for ES&S in North Carolina. So you now understand why I am interested in the fact that Andrews has resurfaced again as a friend and contributor to powerful people in state government — powerful people who can help him with his state contracts.[…]

Civitas also pointed out how generous Andrews has been with the stuff in his wallet around our fair capital city:

[…] And, when it comes to campaign contributions, Andrews definitely knows where his bread is buttered. Except for contributions to former state legislator Republican Jean Preston, who was a member of the Joint Select Committee on Electronic Voting Systems, Andrews had never contributed to a Republican until September 2, 2011 when he 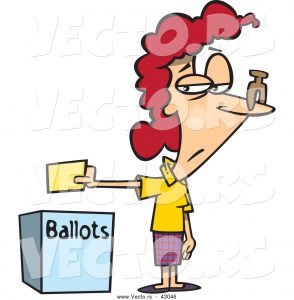 contributed $250 to the Committee to Elect Thom Tillis. Tillis became Speaker of the North Carolina House of Representatives in 2011 after the Republicans had won a majority in both legislative houses for the first time in history.  In September of 2011, Tillis had just completed his first session as Speaker of the State House.

Since 2011, Andrews has mostly given to Republicans, with few exceptions. The most notable are two $500 contributions (one in 2014 and the other in 2015) to Attorney General Roy Cooper, who is running for governor against Pat McCrory in 2016. Andrews has contributed $9,000 to Governor McCrory’s Campaign since February 2012. He gave no money to McCrory in his first run for governor in 2008. Andrews had previously donated $16,250 to former Perdue’s campaign. The gubernatorial contributions are important because the governor appoints the members of the State Board of Elections (SBOE) and the SBOE makes the ultimate decision on voting machine vendors, etc. for the state.

So, now we get to the Lewis connection:

State Representative David Lewis (R-Harnett), who chairs the powerful House Rules Committee, is answering new questions about changes made to a bill that, if passed, would have benefitted a campaign donor.

The questions come less than a week after a fellow Republican member of the State House filed a complaint with the North Carolina Ethics Commission against Lewis over last-minute changes made to a different bill that benefitted a friend and donor of Lewis.

At issue in the latest round of scrutiny are changes made to House Bill 38, part of which sought to drastically reduce the number of agencies required to receive printed copies of appellate court decisions.

One company holds the contract to print the reports. A copy of the contract obtained by On Your Side Investigates from the North Carolina Administrative Office of the Courts shows periodical updates must be printed throughout the year in addition to hard-bound volumes of the full year’s published opinions.

The five year contract, as currently written, amounts to roughly $2.1 million. It’s hard to put an exact value on the contract because payment depends on the number of pages ultimately included in each volume and update.

The AOC printing contract is held by Capital Marketing Solutions, which is owned by New Bern businessman Owen Andrews.

The General Assembly was in session at the time both contributions were received.

Both Lewis and Moore have said the contributions were in response to generic end-of-quarter fundraising mailers.

But a review of campaign finance records show stark difference in the way in which the two campaigns reported Andrews’ contributions.

Moore’s campaign listed the contribution from Andrews using his correct name and his business as Capital Marketing Solutions, the company that holds the AOC printing contract.

Lewis’ campaign misspelled Andrews’ last name—it omitted the ‘d’ in Andrews—and listed his employer as Kennell Development, a business that Andrews also owns but is not associated with the printing contract. The name of the listed company also misspelled.

Lewis called the spelling errors a clerical mistake and said Andrews had always reported his employer as Kennell Development in previous contributions dating back to 2013.

House Bill 38, which would have drastically reduced the number of appellate division reports required to be printed, had passed through the Committee on Judiciary II and was in the Appropriations Committee when it was abruptly pulled and sent to the Rules Committee—chaired by Lewis—in early June.

The move to pull the bill from committee came exactly two weeks after Andrews’ May contribution to Lewis.

More than a month later, on July 22, 2015, the Rules Committee reported a favorable substitute to the original bill that restored requirements to print appellate division opinions for the long list of agencies, judges and other officials.

[…] Ultimately, the original language that sought to reduce the printing requirements was restored in a different committee and the bill was approved by the House with the requirements to no longer print and distribute appellate division reports to the long list of agencies, judges and officials.

The bill was sent to the Senate, where it stalled and was never voted on.

In an email to On Your Side Investigates, Andrews said the value of his company’s contract with the AOC has still been greatly reduced because of the separate bill that allowed agencies to opt out of receiving the printed reports.

“The contract you refer to was greatly reduced by the General Assembly this session which certainly leaves a question mark about your story as it pertains to me. The monetary value went down,” Andrews said.[…]