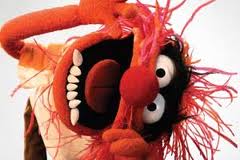 One man. One camera. Driving one of our nation’s most powerful elected officials bat$*&t CRAZY.

Guerilla cameraman Chuck Suter and congressman Robert Pittenger have had quite a colorful relationship.  This little gem, produced by Suter, earned Pittenger some rather unflattering international publicity. Their next encounter had Pittenger assigning two uniformed police officers to babysit Suter, while the congressman called out the cameraman from the podium.  Chuck also managed to get the congressman on camera lecturing his constituents about how they “just don’t understand politics.”   A later Chuck & Bob encounter resulted in a video reminiscent of THIS EPISODE.  What is it about congressmen from North Carolina named Bob AND video cameras ?

Pittenger also earned some embarrassing publicity when one of his aides took to Facebook to verbally abuse Texas senator Ted Cruz — a Tea Party hero.   We can’t blame THAT ONE on Chuck.

Pittenger just got himself a primary opponent, so he’s decided to go out and hit the campaign trail.  On Saturday night, Chuck and Bob found themselves in the same room, once again, in Union County.  Chuck tells the story for himself on Facebook: 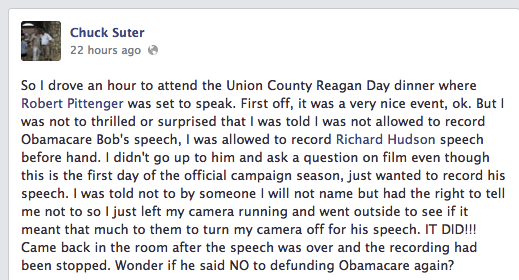 5 thoughts on “NC-09: A rather inauspicious start to campaign 2014 for BFFs Chuck and Bob”