We’re getting flooded with a lot of mailers in this area touting Richard Hudson’s “conservative” record in Washington.  (Currently, Conservative Review has Hudson rated with a grade of D (60%) in their conservatism rankings.)  Just like we did with Richard Burr, we thought we’d take a closer look to see how accurate — or not — that “conservative” label is:

called sequestration. These spending cuts were designed to pay for the August 2011 debt limit increase. Voting for this deal increased spending and taxes immediately and relied on a future Congress to keep potential spending cuts, despite the irony that the Representatives voting in favor of this legislation canceled out previously agreed to spending cuts. The deal was approved in the House 332 – 94 on Dec. 12, 2013.

This amendment, sponsored by Rep. Justin Amash (R-MI) would have re-affirmed the 4th Amendment of the Constitution that protects Americans from unreasonable searches and seizure. It also looked to extend Fourth Amendment guarantees to electronic communications and required specific warrants granted from specialized intelligence courts in order to obtain this information. Unfortunately, this amendment failed 205 – 217 on July 24, 2013.

This farm bill trades minor reforms to food stamps for a permanent farm bill. This legislation would make market distorting subsidies permanent and is being used as a bait and switch for conservatives. Not until late in the process was it revealed that the legislation was permanent and it would inhibit conservatives from attempting future reforms to corporate welfare and food stamps. Additionally it gave momentum to reauthorizing what ended up being a $1 trillion farm bill.

This 1700+ page, $1.1 trillion Omnibus spending bill granted President Obama full funding for 11 of 12 federal departments for the remainder of the fiscal year – without any congressional restrictions on his unilateral action on amnesty, Obamacare, and environmental regulations. Worse, this bill actually provided Obama with an additional $2.5 billion in funds to facilitate his executive amnesty. Most egregiously, this 1700-page bill was crafted as a backroom deal by lame duck senators who were rejected by the American public in the November election. Speaker Boehner placed the bill on the floor with only 48 hours to read all 1700 pages.

This spending bill was filled with problematic provisions such as arming “friendly” rebels in Syria, extending the corrupt Export-Import Bank, and sets up a post-November election lame-duck session of Congress. The main conservative concern with a lame duck is the potential for a massive omnibus spending bill and the potential for an unaccountable Congress to pass an Internet sales tax. This bill passed the House 319-108 and was signed into law by the President.

The 1,582 page Omnibus spending bill was given very little time to be read but increased spending $45 billion over Budget Control Act levels. Last minute bills are a typical Washington maneuver to ram through large spending bills with very little scrutiny. This bill passed the House 359 – 67 on Jan. 15, 2014 and was signed by the president on Jan. 17. 2014.

This vote was to reauthorize No Child Left Behind through 2020. No Child Left Behind represented an unprecedented expansion by the federal government into education. Overall this reauthorization legislation is a missed opportunity for a Republican controlled congress to empower parents and put children first. Education is anissue that is near and dear to families and represents and opportunity for Republicans to lay down a bold contrast of family first policies. Conservatives

believe education decisions should be made by state and local officials, yet this bill retains the fundamental mandate requiring states to concoct uniform standards in reading and math that would be applied statewide throughout all jurisdictions. The bill keeps the plethora of federal testing requirements that have been the driving force behind the adoption of Common Core. Likewise, it does nothing to address the duplicate and wasteful programs funded by the Department of Education, but in reality actually expands education control into preschool programs. Instead of renewing the 2001 law with minor changes, conservatives should be implementing sweeping reforms that allow states to drive innovation in their own school districts.

The Bipartisan Budget Agreement of 2015 (H.R. 1314) represents the convergence of everything that is wrong in Washington and is a prime example of &nbsp;the engendered permanent growth of the federal government. This bill married a blank check of approximately $1.5 trillion in debt suspension with a two-year budget plan that placed the final nail in the coffin of the 2011 Budget Control Act, which cut government spending for the first time in years. At a time

when spending is already slated to increase by another $250 billion in 2016, this deal busts the budget caps by $112 billion. In classic Enron-style accounting, the hodgepodge of offsets are either notional, intangible, or scheduled to take effect almost ten years from now and in typical Washington fashion, unlikely to ever come to fruition. In addition, this bill bails out the broken Disability Insurance program with $150 billion from Social Security retirement benefits without enacting any durable and verifiable reforms that address the systemic flaws in the program which have made this program a dependency-inducing Ponzi scheme rife with fraud. Finally, this budget bill fails to exact a single policy concession from Obama on the major issues of our time immigration enforcement, Planned Parenthood, EPA regulations, the Iran deal, etc. and takes the power of the purse off the table as leverage against any potential executive overreach for the remainder of the Obama presidency.

Republicans gained control of both chambers of Congress last fall with the premise of stopping Obama by using their Constitutional right of the power of the purse to defund key parts of Obama’s agenda. Over the 2015 summer an undercover group released numerous videos depicting Planned Parenthood engaging in the sale and harvest of organs of aborted babies. Conservatives responded with calls

to halt federal funds to private organizations like Planned Parenthood that engage in this behavior. Additionally conservatives called on Congress to with hold funding for President Obama’s disastrous Iran deal, which puts America and her allies at risk, and to continue efforts to defund Obama’s executive amnesty. This vote was on final passage of spending bill that fully funds Obama’s priorities, including abortion, until December 11, 2015. Between now and December 11th, Planned Parenthood is estimated to commit 70,000 abortions. Preceding this vote, Republicans engaged in a series of show votes to give the appearance of fighting against public funding of abortion, however this vote was a critical vote in the House to cut off those federal funds. From a spending and budget perspective this spending bill maintains the excessive burn rate of taxpayer dollars and lacks any spending reforms.

This vote was on the key procedural provision known as Trade Promotion Authority (TPA). TPA grants a special fast-track status to trade deals negotiated by the president and as such has been dubbed Obamatrade. While conservatives generally support trade agreements as important tools for lowering tariffs and trade barriers, and TPA is often needed in order to effectively negotiate with other countries, this particular TPA was problematic for a number of reasons.

Typically, a TPA is passed at the beginning of negotiation cycles so that Congress directs the president to negotiate along specific parameters. In this case, the three primary treaties that would receive fast-track status under this TPA have already been negotiated in secret for years. There is no reason to pass fast track authority without releasing more details about these trade agreements to the public. Moreover, given this president’s penchant for implementing major policies without 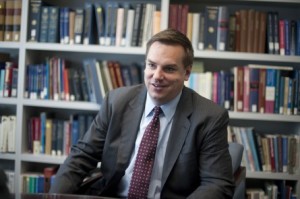 Congress, there was a widespread fear that Obama would use these trade agreements to pursue liberal policies, such as changes to our immigration system, labor laws, and global warming regulations. For example, according to WikiLeaks, one of the impending trade deals – the Trade in Service Agreement (TISA) – contains an entire immigration section, including a provision prohibiting US authorities from conducting in-person interviews for certain visa categories. Additionally, the main trade deal – the Trans Pacific Partnership – contains a “living agreement” provision, which could enable Obama to expand the scope of the agreement during the final months of his presidency or add countries like China to the agreement. Finally, GOP Leadership negotiated a deal to advance Trade Promotion Authority and in exchange for Democrat votes, promised to renew the crony capitalist Export-Import Bank and a failed government handout program known as Trade Adjustment Assistance, a subsidy bailout for labor unions.

This vote was on H.R. 2, the Medicare Access and Chip Reauthorization Act which is expected to increase the nation’s debt by $500 billion over the next 20 years. This bill was cobbled together in a backroom deal by Speaker Boehner and Minority Leader Pelosi. Overall H.R. 2 is a massive health care spending bill that replaces the existing Medicare payment system for health care providers, known as the Sustainable Growth Rate (SGR), with a new bureaucratic pay scheme that would automatically increase reimbursements every year. Although everyone agrees that the SGR was a flawed system, this bill merely replaced one top-down bureaucratic price-control system with a new one, albeit with a more generous reimbursement rate. With this bill Congress failed to address the underlying problems in healthcare entitlements and in true back room deal fashion, included several extraneous provisions designed to buy votes.

REMOVE JOHN BOEHNER FROM SPEAKER OF THE HOUSE

This vote was to determine who serves as the Speaker of the House for the 114th Congress. The Speaker has dominant influence and sets the agenda for what bills and votes are allowed on the floor. After Speaker Boehner partnered with President Obama to whip votes for the $1.1 trillion Cromnibus bill 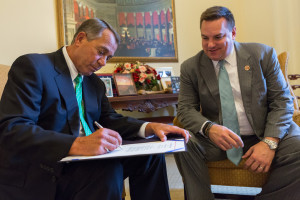 funding Obama’s illegal executive amnesty, conservatives saw that act as the last straw. Because the Speaker is determined by absolute majority of the potential 435 voting representatives, only 29 Republican votes for a candidate other than Boehner were needed to force a second ballot. Forcing a second ballot would have effectively removed John Boehner from Speaker. The conservative position was to vote for anyone besides Boehner or a Democrat. Those listed as YES attempted to remove Speaker Boehner and replace him with another Republican. Those listed as NO voted for Speaker Boehner, a Democrat, or present. Boehner received enough votes to be re-elected Speaker of the House.