It’s probably good to remind the Raleigh drivebys that there is something else to do out there besides stomp on Mark Harris and stalk McCrae Dowless.  There is ANOTHER open race for Congress out on the coast, necessitated by the unfortunate and untimely passing of Walter B. Jones, Jr.

It looks like the race for The Third Congressional District will have more takers than the Ninth will.  There could be two unaffiliateds, two Democrats and as many as a DOZEN Republicans before all is said and done.  They way this will shake out allows current officeholders to take a stab at going to DC without having to give up the office they currently hold.

A doctor in the US House. 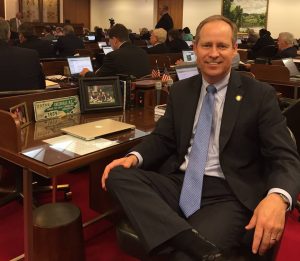 Dr. Greg Murphy has been turning some heads (and not necessarily making them cough) during his short time in Raleigh.  He was appointed to replace the resigning Rep. Brian Brown, but successfully won his way back to Jones Street on his own.  Murphy has been a valuable resource to his House colleagues on the issue of health care.  And he’s caught the attention of The Trump White House and congressman Mark Meadows (R).

Right-leaning groups like FreedomWorks and The Club for Growth are giving Murphy a good, long once-over.  And Murphy’s team put a cherry on top of his announcement today with a  snazzy biographical video offering a briefing on the Raleigh native turned Greenville physician and Pitt County legislator.

A “family” affair:  Murphy’s entry into the race means there could be at least THREE members of the North Carolina House Republican Caucus in this race  — Onslow’s Phil Shepard, Pitt’s Murphy, and Craven’s Mike Speciale.   Speciale  is a former Marine like Onslow’s Phil Law.  But Speciale has made quite a name for himself over the last several years as a conservative warrior in the North Carolina House.

Phil ‘Er Up. The GOP side in this race is already well-represented with Phils:  state Rep. Phil Shepard of Jacksonville and perennial candidate Phil Law of Jacksonville via Wake County.  Shepard has been a quiet conservative voice in the state House. Law ran for this seat in 2018 and 2016 — doing well both times.  He was lucky that he was running against Walter Jones, who could be controversial, as well as another primary opponent with more than his own fair share of controversy.  Law was often the lesser of three evils in the eyes of many voters.  2019 will provide a lot more choices for 3rd district voters.  So, Law may get slapped with a hard dose of reality. 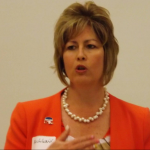 Meetin’ in the Ladies Room.  This race will likely have more than its fair share of the female species on the ballot.  NCGOP vice chairman Michele Nix of Lenoir County has announced.   You’ve also got Ms. Sapp of Onslow County and Mrs. Smith of Pitt County.  The ladies WILL be well-represented.

The Onslow Caucus. The home of Camp Lejeune is already loaded up with congressional candidates.  The Phils are there.  As is Vanessa Sapp, a right-leaning unaffiliated, making her first run for office.

The WHO? caucus. This race is also drawing out its fair share of also-rans.  Dare County Republican Paul Wright has announced he’ll pay his filing fee and take the great leap.   Onslow’s Vanessa Sapp is also  a member here, as is Pitt County’s “fiery read-head” Sandy Smith (R).

Smith loads us up with a lot of bio info on her website, but leaves out an important fact:  Her husband is a bona fide solar goon.  He makes his money running a company in that highly-subsidized industry.  Solar is NOT very  popular in that neck of the woods.

Jeff Moore, editor of First in Freedom Daily, is also reported to be ready to jump in the race.  He lives in Raleigh but has roots in the district.

Former Democrat-turned-unaffiliated legislator Paul Tine of Dare County is reported to be eyeing the race.  As is former Greenville mayor Allen Thomas (D) is reportedly eyeing it as well (and NOT his brother Scott, Tom Campbell).  That wild-and-crazy guy Rufus Edmisten is out there touting the entry of George Parrott (D) into the race.  Parrott had the honor some years back of getting his clock cleaned by Jones.  (He made news more recently by prematurely announcing the departure from this earthly world of one Walter Jones,Jr.)