Somebody has told Renee Ellmers that it would be a GREAT idea to model her reelection campaign after K-HAG’s and subject us all to one big kumbaya visit-to-the-OBGYN moment.  She’s hooked up with this Women2Women group sponsored by something called Main Street Advocacy. 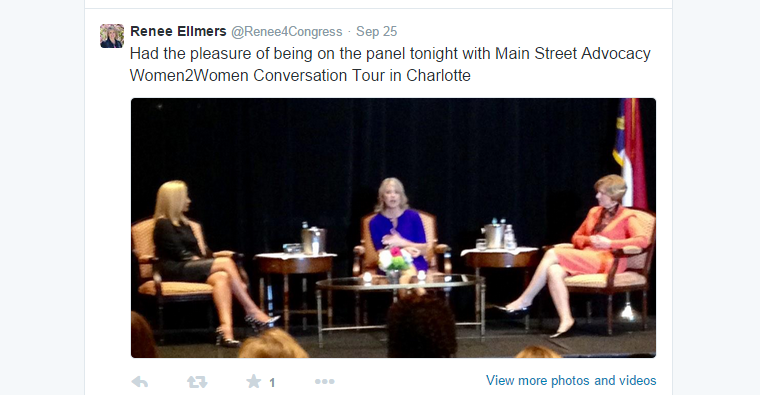 So, what is this Main Street Advocacy organization that has our Renee sooooo wowed?  Here’s the word from Roll Call:

Main Street Advocacy, a group that seeks to promote moderate Republican ideas, will launch a nationwide initiative later this month to bring more women into the political process.

“Women2Women” kicks off Sept. 25 in Charlotte. GOP Reps. Renee Ellmers of North Carolina and Susan W. Brooks of Indiana are expected to attend the discussion of issues that women say drive them to the ballot box.

The idea is the brainchild of Sarah Chamberlain, the group’s chief operating officer, who grew frustrated over the past two cycles when Republican candidates’ comments on social issues helped squander GOP pickup opportunities — hindering the party’s past efforts for Senate control. Remarks on rape from former Missouri Rep. Todd Akin and former Indiana Treasurer Richard Mourdock in 2012 — who both lost their Senate races — sullied the GOP’s image among women and likely hurt the party’s chances in other states.

Oh, and don’t forget idiotic comments like how Congress needs to dumb things down so women can understand them.  (Jus’ sayin’ …) MORE:

Chamberlain said the forums will focus on the pocketbook issues she says poll well among women between the ages of 35 and 50.

“Women across the country like it when we come in and talk to them about their issues,” Chamberlain said in an interview. “And it’s saving money for the kids’ colleges, retirement, energy costs — things like that. … We are not touching the third rail, and they know that going in. We’re not here to talk about the social issues.”

In other words, it’s time to stop wasting time and money on the church-going Wal-Mart shopping crowd.  You know — the folks who helped give us Ronald Reagan and Jesse Helms and so much other GOP success over the last 34 years.

You can visit Main Street’s web site to get even more info about the goodness they would like to inflict upon the GOP and the rest of America:

Welcome to something refreshing on the conservative landscape!

It’s unity instead of division, pragmatism instead of social dogma. It’s what conservatives have traditionally stood for – and we take pride in that heritage. It was conservatives that led the fight for civil rights – first in abolishing slavery, then in expanding equal rights for women, and then in fighting to end racial inequality. Conservatives busted up the big trusts and fought against corporate monopolies.

Um, we did?  Actually, that was Teddy Roosevelt and his buddies in The Progressive Party.   MORE:

Conservatives fought for environmental protection and against political patronage. Conservatives ended the Vietnam War and won the Cold War without firing a shot. Our values unite rather than divide:

Ok, we’ve got conflict already.  At the start of this blurb, they’re championing government intervention to bust up “the big trusts” and fight against “corporate monopolies.” Then, we have bullet points praising “limited government and “the power of free markets and free people.” Something is not adding up here. MORE:

Our country continues to face serious issues that require serious leadership.  We must support a governing coalition that puts results ahead of politics – committed to making Washington work again. We must reach out to independents, disaffected Republicans and Democrats, centrists, suburbanites and young voters, offering pragmatic, common sense solutions to the complex challenges facing our country today. Our mission is to bring together those who care about this country after decades of hyper-partisanship and dysfunction in Washington. Our goal is unity instead of division, supported by a commitment to governing with core principles.

And here is some more *celebrating* of free market economics on Main Street’s blog:

A few weeks ago, I talked about inversions here on the blog and how they have the potential to cause serious damage to the U.S. corporate tax base.

Yesterday, a story broke about another U.S. company embracing the inversion trend. Burger King has announced that it will be buying Canadian chain Tim Horton’s and moving it’s corporate base to Canada – a move that will likely cut it’s U.S. tax bill. You can read more about the move here.

Corporate inversion is a huge problem that no one – not Congress, not President Obama – is doing anything about. Until someone steps up and leads the charge on changing the law to stop these inversions, there is only one group left that can make a difference – the consumers. U.S. consumers should protest and boycott Burger King (and other U.S. companies who are taking the inversion route), so that those companies will feel the sting at home. And Congress should step up to a) fix the inversion loophole and b) lower the U.S. corporate tax rate, so that companies no longer have the means or the incentive to make this kind of move.

First, it is a travesty that a socialist utopia like Canada now has a more business-friendly climate than the United States.  So, these folks — and apparen

tly our congresswoman — want to crucify businesses that are acting in the best interests of their investors and employees by searching out the best possible tax and regulatory environment?  So, we’re calling this kind of thing “conservative” now?  Real conservatives who truly respect and appreciate the free market would attack our punitive federal tax and regulatory system so it stops chasing investment and economic growth to places outside of our national borders.