Some people JUST don’t know when to shut up.

Well, not long after getting off the air, it appears Ellmers hooked up with a pro-amnesty group to try and put some heat on the radio host — as retribution for the on-air beatdown.  Renee upped the ante in this squabble by taking to Twitter to criticize — no, let’s call it what it is, mischaracterize and basically lie about — Ingraham: 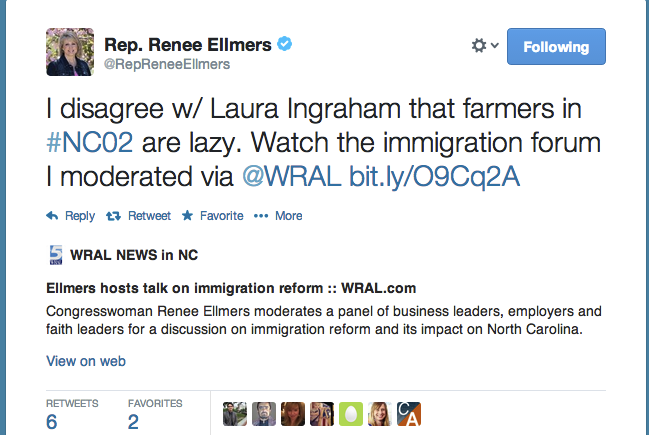 If you listen to the audio of the interview,  you will learn that Ingraham said NO SUCH THING.  Ingraham actually criticized Ellmers and her fellow “immigration reformers” for insinuating at a recent immigration policy forum that Ellmers’ constituents were LAZY and that immigrants were needed to pick up the slack.

As I said before, absolutely NOTHING GOOD can come from picking a fight with a popular conservative figure when you are a Republican running in a Republican-leaning jurisdiction.  I bet Frank Roche understands that.