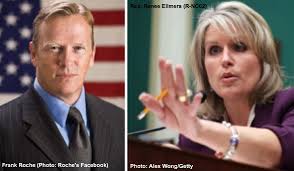 I got ANOTHER campaign mailer from Renee Ellmers this weekend disguised as “official business.”  I know I have worked this issue over here and here.  But it is just so brazen and arrogant for someone – -claiming to be a Tea Party conservative — to campaign for reelection on the taxpayer dime.

In the mailer, ol’ Renee claims she’s not for that nasty ol’ amnesty thing.  But her record brings the credibility of this flier into question.

It’s quite interesting that these mailers started coming as her potential opponents started announcing and the filing date approached.  This latest mailer focuses exclusively on immigration and the AMNESTY issue.  Even the lazy mainstream media can tell she’s feeling some heat on this.

Renee has built quite a reputation for doing just what John Boehner tells her to do.  She marched lockstep with Boehner initially, on selling amnesty.  Even writing an op-ed for The Fayetteville Observer.  She caught some heat for that piece.  Speaker Boehner — who our girl affectionately refers to as her “boss” — may be alleviating some of that heat by suggesting a vote on “immigration reform” won’t happen this year.  *Yeah.  Do it after the rubes have put us back in for two more years.*

Wake County’s Frank Roche — at one point — had looked like quite the sacrificial lamb in the upcoming GOP primary for the Second District.  His fundraising and name ID are lagging far behind that of Ellmers.  But Roche has made amnesty a centerpiece of his campaign strategy, and has hit the incumbent hard for marching lockstep with Eric Cantor and John Boehner on the issue.  This plan of attack is opening a lot of doors in the district for Roche that had been previously closed and locked.