The drivebys are stunned — stunned, I tell you — that the conservative Club For Growth would come out against the reelection of “Trump ally” Renee Ellmers.  Yes, this is the same woman who — just a few years ago, in response to criticisms that she pretended to be Tea Party and then turned left in DC — said ”I’ve never really been one of those Tea Party people.”

And YES she is the same woman who — ONE WEEK BEFORE THE NORTH CAROLINA PRIMARY — voted for John Kasich in a county straw poll and told a nearby driveby it was because Kasich was ”the only adult left in the race.”

Nee-Nee has hugged up to The (liberal) Ripon Society, John Boehner AND Kevin McCarthy.  She’s got Pat McCrory’s useless nephew running her campaign.  The woman raised over ONE MILLION DOLLARS in PAC and DC special interest money for her 2014 race.  Ellmers has aided and abetted the growth of government and spending and has aided the contined survival of ObamaCare.  She’s been on The Hill for six years — longer than anyone else in the 2nd district race — and has the nerve to run as an “outsider.”

This shrew will say anything and do anything to stay in DC and avoid having to move back to Harnett County.  She has been all over the ideological map.  Yet not the actual map.  She rarely makes it out of the confines of Wake County when she’s in the state.

Speaking of the governor’s useless nephew, he spoke to the drivebys again:

[…] Ellmers’ campaign Friday called the Club for Growth “a Washington special interest group that supports candidates like George Holding and Greg Brannon because they have pledged to be their puppets.” 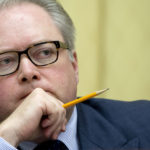 ONE of the problems here?  They aren’t supporting Holding or Brannon.  If you read their release, they are ONLY opposing Ellmers.  (They were backing Ellmers’s opponent Jim Duncan prior to the last-minute redistricting.)

Renee Ellmers has consistently been rated as one of the most liberal Republicans in the state’s congressional delegation.  Holding, by contrast, has — in his short time in DC  — been consistently near the top of most congressional conservatism surveys.  Greg Brannon also has impeccable conservative credentials.  Holding has been endorsed in this race by Tea Party-affiliated FreedomWorks (which had endorsed Brannon in his 2014 US Senate run).

What’s going on here?  People who have seethed over Nee-Nee’s mealy-mouthed antics for years finally see a chance to push her over a political cliff.  And they’re doing what they need to educate people about her so the job finally gets done.  Like The Who advised us:  Don’t Get Fooled Again.