NBC and Marist conducted a poll of North Carolina adults from August 4 to August 10.   According to those folks, November is going to look very good for the Democrats.

Before I hit you with the numbers, let’s look at their methodology:

This survey of 1,030 adults was conducted August 4th through August 10th, 2016 by The Marist Poll sponsored and funded in partnership with NBC News and The Wall Street Journal . Adults 18 years of age and older residing in the state of North Carolina were contacted on landline or mobile numbers and interviewed in English or Spanish by telephone using live interviewers.Landline telephone numbers were randomly selected based upon a list of telephone exchanges from throughout the state of North Carolina from ASDE Survey Sampler, Inc.The exchanges were selected to ensure that each region was represented in proportion to its population.Respondents in the household were randomly selected by first asking for the youngest male.

This landline sample was combined with respondents reached through random dialing of cell phone numbers from Survey Sampling International. Assistance was provided by Luce Research for data collection. After the interviews were completed, the two samples were combined and balanced to reflect the 2013 American Community Survey 5-year estimates for age, gender, income, and region, except for race, which is from the 2010 census. Results are statistically significant within ±3.1 percentage points. There are 921 registered voters.

First, WHY would we care what people who are not registered to vote think about the upcoming elections?  They can’t participate.  They won’t be a factor.

Second, WHY survey random phone numbers instead of obtaining lists of registered voters?  Campaigns do it all the time. (Longtime followers of polling KNOW likely voters are the best measure of an election.)

And WHY ask for the “youngest” male in the household? (An empty-headed sociology major home from college is more likely to say what the drivebys want than, say, HIS DAD paying the bills.)

And you just have to love that last paragraph where they talk about how they cook the findings.

Polls released this early are typically for shaping public opinion.  Look back at past elections, you’ll see that polls taken closer to the actual vote tend to tighten up and more accurately reflect what actually happens. 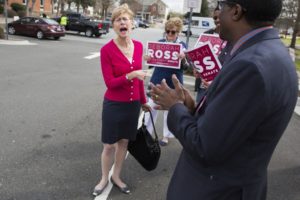 And, last but not least, the August poll has Clinton leading Trump 45-36 in North Carolina.  (THAT result is the hardest one for me to believe.  Trump may be down, but not by that much.)

I can hear it now from the GOPe — *”See?  See?  The Donald is dragging us ALL DOWN! If you had just listened to us and picked Marco, or JEB! or Kasich, we’d be in MUCH better shape!”*

Rush had an interesting point the other day that I just had to offer an “Amen” to:  Maybe it’s time to shift from telling us what a bad person your opponent is and toward telling us the great things you are GOING TO DO if we vote for you.  Compare what you’re offering to what your opponent is offering.  Educate the voters of the consequences of their November choices.

People are scared about the future of the state and the country.  They are being filled with a bunch of crap by the

drive-bys and their radical leftist comrades.  They want things to get better.  (Statism will not accomplish that mission.)

We took to the streets in 2009 — and stormed the polls in 2010 — seeking relief from statism. Yet, the folks we entrusted to provide that relief have not put up much — if any — of a fight against statist creep.  They’ve sneered at us and dismissed us with a wave while schmoozing and boot-licking the special interests with the big checks seeking to keep the taxpayer spigot open and flowing. JUST LIKE THE FOLKS WE THREW OUT.

27 thoughts on “NBC August poll: Clinton, Cooper AND Ross up in North Carolina”