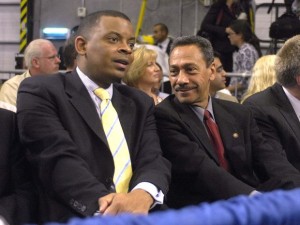 Big Barry has nominated two guys — who happen to be liberal black Democrats, like himself — from North Carolina for important jobs in Washington.  It’s important to point out that neither of these two guys is all that qualified for these posts.  But that’s not stopping our Republican senator Richard Burr from swooning over them like a 14-year-old girl at a Jonas Brothers concert.

Charlotte mayor Redd Foxx has been tapped by Big Barry to head the US Department of Transportation.  Never mind that the only transportation experience Foxx has involves (1) sitting in Charlotte traffic, (2) flying out of Charlotte Douglas, (3) getting the airport snatched away from city supervision, and (4) lobbying for some federal grants for light rail and a streetcar.  Under Foxx’s reign in the Queen City, the city manager has described Charlotte as being “in decline.”  (I notice that McClatchy pulled this particular story from their Charlotte web site right about the time Foxx got nominated by Big Barry.  Nice going, guys.)

Charlotte continued its tradition under Foxx  — started under Mayor Pat, by the way —  of having the biggest tax burden in North Carolina.   Foxx picked a budget fight with the city council over a tax hike he wanted to pay for his ridiculous streetcar idea.  Foxx has also helped engineer millions upon millions of  taxpayer-subsidized handouts to The Panthers for stadium renovations.

Here’s what our Republican senator, Richard Burr, had to say about the nominee with that stellar record:

“I am pleased to see the president look to North Carolina to fill this important cabinet position, and I congratulate Mayor Foxx on this honor.  I look forward to introducing Mayor Foxx to my colleagues and working with him as his nomination moves through the Senate.  I believe he will ably serve North Carolina and our nation as the next Secretary of Transportation.”

Let’s move on to Mel Watt — from the Hugo Chavez / Fidel Castro wing of the  US House Democrat caucus.  Richard Burr is giving two thumbs up to Watt heading the Federal Housing Finance Agency:

“Having served with Mel, I know of his commitment to sustainable federal housing programs and am confident he will work hard to protect taxpayers from future exposure to Fannie Mae and Freddie Mac.  I look forward to working with Rep. Watt in his new role to find new ways to facilitate more private sector involvement in the housing and mortgage markets.”

Mel Watt — a fan of the private sector ????   Let’s check out his ideological rankings.  He gets a 70 (out of 100) from Americans for Democratic Action, a liberal group.  The American Conservative Union gives Watt a conservatism rating of 4 (with a possible max of 100).   Mel and Mr. Foxx are the kind of guys we were told Senator Elaine Marshall would have championed.

The Daily Caller had a few interesting things to say about the North Carolinian who may well have a lot of say over your home mortgage:

President Obama’s pick to head the Federal Housing Finance Agency once said that a “majority of white voters” would never vote for a black candidate and that they should be excluded from “the democratic process.”

Watt, the former chairman of the Congressional Black Caucus, has in the past accused white Americans of racism.

“There would be a substantial majority of white voters who would say that under no circumstances would they vote for an African American candidate,” Watt said Oct. 14, 2005 during a Washington hearing held by the National Commission

on the Voting Rights Act.

The Voting Rights Act should be expanded to “adjust districts to take [racially motivated voting] into account,” Watts said.

Such voters “need to be factored out of the equation,” Watt said, because “I’ve got no use for them in the democratic process.”

According to a contemporaneous report of the hearing published by the Cybercast News Service, Watt said that black voters — unlike whites — don’t have “an absolute commitment” to voting for a candidate based on race.

“Black people have not had the luxury of being able to say, ‘Under no circumstances will I vote for a white candidate,’” Watt said in his remarks.

Obama would win 43 percent of the white vote in 2008 — the largest share for any Democrat in a two-man race since 1976 — along with 95 percent of the black vote.

In 2004, progressive independent presidential candidate Ralph Nader claimed that Watt hurled a “racial epithet” at him during Nader’s meeting with the Congressional Black Caucus, which urged Nader to suspend his campaign and support John Kerry.

Nader alleged in a letter that Watt said, “You’re just another arrogant white man – telling us what we can do – it’s all about your ego – another f–king arrogant white man.” Nader demanded an apology from Watt.

“I could not be more disappointed in this nomination,” Senator Bob Corker, Republican of Tennessee and a member of the Senate Banking Committee, said in a statement.

As director of the housing agency, Mr. Watt would oversee Fannie Mae and Freddie Mac, the two taxpayer-owned mortgage finance giants that have provided enormous support to the housing market since the financial crisis of 2008. They guaranteed two-thirds of all the mortgages made last year.

The Obama administration wants to reduce government involvement but has made almost no big moves in that direction. Some critics question its resolve to scale back the role of Fannie and Freddie, which received one of the biggest bailouts of the financial crisis. They say Mr. Watt’s nomination looks like tactical maneuvering, designed in part to placate progressives in Congress who say the president has done too little to help homeowners.

“It seems like a political move when a substantive one is needed,” said Phillip L. Swagel, a professor at the University of Maryland School of Public Policy. Mark Zandi, an economist at Moody’s Analytics who has focused on housing, was also a candidate to lead the housing agency. Mr. Zandi, “seemed to be a perfect nominee,” said Mr. Swagel, who was an assistant secretary for economic policy under Treasury Secretary Henry M. Paulson Jr.

Reducing mortgage balances could be the issue that draws the most scrutiny for Mr. Watt during the confirmation process.

Given the level of controversy around this policy, some mortgage market analysts questioned on Wednesday why the White House had nominated someone who has identified so closely with it.

Would a North Carolina native nominated by a GOP president get this same kind of bend-over backward courtesy from a sitting Democrat senator (even one from NC)?  Don’t bet on it.  As a reference, look back at the drama around US Judge Terrence Boyle, from North Carolina, whose promotion within the federal judiciary has been blocked by Democrats since the Reagan Administration.