You have really gotta *love* the remnants of the mainstream media.  Check out this piece of reporting by John Drescher’s shih-tzu: 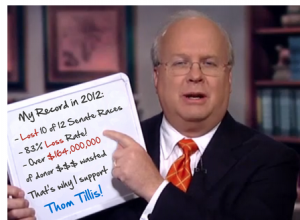 […] House Speaker Thom Tillis of Cornelius, meanwhile, hosts a noon fundraiser at Bank of America Stadium with former White House adviser Karl Rove. Rove has angered many conservatives by promising to help Republicans nominate candidates electable in a general election, and a protest is planned during his appearance. […]

Let’s see.  TEN of twelve of his Senate candidates in 2012 LOST.  Rove worked against Ted Cruz in Texas, Rand Paul in Kentucky, Marco Rubio in Florida, and Mike Lee in Utah — obviously siding with somebody else who was, um, “electable.”

Rove saddled us with the *dynamic* Elizabeth Dole to replace the legendary Jesse Helms.  He led George W. Bush’s uninspiring lots-closer-than-they-should-have-been races in 2000 and 2004. Rove was at Bush’s right hand when (1) the DC GOP lurched into a spending spree that ended the party’s 12 year reign on Capitol Hill; (2) the size and scope of government exploded during GOP control of the executive and legislative branches, arguably leading to the Obama era;  and (3) bureaucratic meddling led to the financial crisis and the disastrous bailouts.

I believe the Tea Party’s animus toward Rove has to do with all that as well as THIS:

Karl Rove has founded a new group designed not to beat Democrats, but to destroy a wing of his own coalition: the Tea Party. […]

3 thoughts on “Media: Tea Party upset with Rove because he “Wins”?”