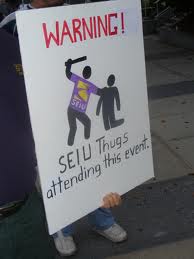 Since 2008, The Service Employees International Union (SEIU) has established a reputation as Barack Obama’s shock troops — his brownshirts, his muscle.  They’ve often taken to the streets to, ahem, hammer home the message of  their Dear Leader @ 1600 Penn — especially during the Tea Party heydays of 2009-2010.

If SEIU disagrees with you — they shout you down, try to ruin you in the media, or worse.  [Look back at their handiwork in Wisconsin prior to, and during, the attempted recall of Republican Governor Scott Walker.]

SEIU owns North Carolina’s State Employees Association (SEANC).  SEANC members will tell you — with a straight face — that they are an association, not a union.  Never mind that their web site touts the group as SEIU Local 2008.

Lately, our state’s stupid, gullible, and mostly corrupt mainstream media have been gushing over these so-called  “Moral Monday” protests at the legislative building in Raleigh.  We’ve been subjected to puff pieces trying to portray the protesters — hauled off to jail for disturbing the peace and trespassing — as frustrated taxpayers who are not much different than those Tea Party folks.

But NC NAACP president Bill Barber — aka “The Round Rev” — may have spilled the beans.  Barber has been the front man for these “Moral Monday” protests aimed at halting such atrocities as letting working people keep more of their money, letting parents have more input into their children’s education, and forcing government to live within its means.  Barber’s group issued a release about their latest ruckus on Jones Street:

[…] A crowd of roughly 1,600 people – including more than 100 who were arrested and jailed – gathered at the North Carolina General Assembly for a mass pray-in, sing-in and teach-in against the extreme agenda of the state leadership. The multiracial group of clergy members, representatives from SEIU District 1199, college students, seniors, doctors, nurses and others are participating in the fifth recurring “Moral Monday” protest to oppose and expose an avalanche of regressive bills from the legislature. […]

SCREEEEEEEECHHHH.   Wha ….????  The State Employees Association is SEIU 2008.  Who is SEIU 1199?  Well, those folks are from the New York City area and surrounding states.  Carpetbaggers.  Astroturfers.

McClatchy, WRAL, and Gary Pearce have been bending over backwards to portray The Round Rev’s protesters as angry North Carolinians who just want their leaders to listen to them.  In reality, it appears we have Barry Obama’s stormtroopers striking back against a state that is trending RED after going with Big Barry in 2008.

My fellow right-thinking scribe Paul Chesser, of the National Legal and Policy Center & The Carolina Plotthound, lays the whole thing out pretty well:

[T]he bellowing of Bill Barber and his few minions wasn’t enough. So he called in reinforcements and professional agitator [SEIU 1199 chapter president George] Gresham – who sharpens his trade in The Bronx and knows how to get arrested in style – was willing to head south. There he was on Monday (Barber calls the protests “Moral Mondays”) outside the state Senate door waiting for his arrest, along with 150 or so others. It’s a dog and pony show: protesters show up, sing and chant, law enforcement officers walk them away to file their arrests, and then they’re free to get on with their lives by the afternoon. God forbid they should actually get thrown in cells for several days and experience punishment for the disruptions they cause.

But this is Gresham’s shtick, but he’s clearly not down just for the NC struggle – he’s got bigger goals. The Tar Heel State is just a means to a larger end.

“We need this fight in the whole country, and if we’re going to begin in North Carolina, so be it,” he said. […]

4 thoughts on “Invasion of The Purple People: SEIU moves in for the kill in North Carolina”