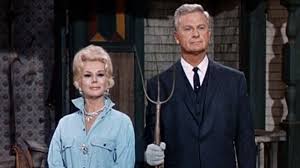 US Senator Kay Hagan (D-NC) just can’t stay away from the ritzy, limousine-liberal enclave on Park Avenue in Noo Yawk City. The pantsuited-Greensborian is appearing to morph into Eva Gabor’s character Lisa Douglas in that American television classic “Green Acres.”   We’ve documented the northward travels of Chuck Schumer’s Sock Puppet™ previously, but this one was so fabulous it got written up on a tony, frou-frou New Yawk web site:

Hillary Clinton is careful to avoid discussion of her plans for 2016, but other female Democrats—particularly her former Senate colleagues—have no such compunction.

“All of the Senate Democratic women have written her a letter encouraging her to run,” Senator Kay Hagan of North Carolina told a crowd of more than 200 women at 583 Park in New York City on Monday afternoon.

Hagan was one of the featured guests at a panel discussion hosted by Emily’s List, the political group dedicated to electing female Democrats, which brought together a handful of its candidates from around the country.

The group has been hosting a series of “Madam President” forums to promote the idea of electing a woman president, and while Monday’s event wasn’t technically part of that series, the prospect of Hillary 2016 hung over the proceedings.

Behind the panelists were two banners with the faces of a dozen female leaders, including Clinton, and the event’s press materials featured Clinton at the top of the list of “Women We’re Watching” for 2016. (Second on the list was New York senator Kirsten Gillibrand.)

Stephanie Schriock, the group’s president, touted the Madam President program, and said “this network will help the nation elect its first woman president … and its second, and its third.”

Clinton didn’t come up until near the end of the panel discussion—after a broader conversation about how women address self-doubt, compromise, and power—when the moderator, Cosmpolitan editor-in-chief Joanna Coles, asked the panel whether they support Clinton.

“It’s hard for me to imagine her not doing it,” said Rep. Allyson Schwartz of Pennsylvania, who is running for governor next year.

“Add me to the ‘Yes’ list,” said Hagan, after mentioning the letter she signed with her colleagues.

(Clinton mentioned the bond she formed with her female colleagues during a speech in Buffalo last week.)

In the meantime, Emily’s List is trying to keep incumbents like Hagan, who faces a tough re-election race in North Carolina, while expanding the number of women in the Senate.

“More women than ever in history voted for Democrats” in 2012, Schriock said, noting that if female senators could be elected in 2014, the Democratic caucus would be 50 percent women. (The group has endorsed six Senate candidates so far.)

“The Republican Party doesn’t just lack women, it doesn’t even seem to like them,” she added.

I took a quick poll around Haymaker HQ.  We ALL dig the ladies.  (But not this crowd.  For those of you who aren’t familiar with this Emily’s List group —  think of your ex-wife and her loud, overbearing, hirsute mother.) MORE:

“Ladies, this is for you,” she added. “If God made anything better than a woman, He must have kept it to himself.”

In her brief, rousing remarks, she pulled on her time in the State Senate, Dante’s Inferno, and her grandmother’s wisdom.

“We do not need more legislative or executive daddies to tell us what to do with our bodies,” she said, to laughter and applause.

She ended with a simple request: “Please give more to EMILY’s List.”

2 thoughts on “Hagan: “Dahling, she loves you but give her Park Avenue …””