Albeit a minor infraction.  But, still:

If you have U.S. Sen. Richard Burr’s drivers license, he may not need it anymore.

In a Saturday speech to Rowan Republicans, Burr told a brief story of losing his driver’s license when going to vote recently. He speculated the driver’s license might be in the Ronald Reagan Washington National Airport, located in Arlington, Virginia.

I can just imagine some underage college kid using it to get served in a Georgetown bar.  *Here you go, senator.  A Shock Top in a dirty glass.*  MORE:

“I said ‘my passports are in Washington and I don’t have a military ID, but I’ve got this little ID,’” Burr said, recalling his voting experience. “Clearly, I’ve lost my driver’s license, it’s probably sitting in the Reagan Airport. I probably lost it last night. I said ‘can I fill some type of provisional ballot out until I figure out what’s going on?’”

The News and Observer of Raleigh reported that Burr, a U.S. Senator since 2005, filled out a reasonable impediment form and Burr has also obtained a new driver’s license. According to the N.C. Board of Elections, reasonable impediments include: lack of proper documents, family obligations, transportation problems, work schedule, illness or disability. Voters can also list “other” and describe the impediment. 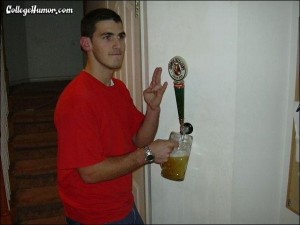 “It was me and they made me prove it was me,” Burr said. “That’s a good thing. Now, let’s make sure it’s not in vain. Help me get elected next Tuesday.”

11 thoughts on “Did Richard Burr confess to a crime?”